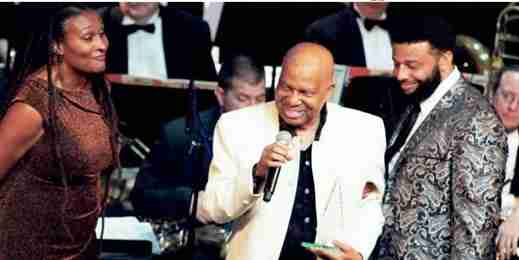 One son spoke of his father’s “lifetime of integrity, and most of all, God consciousness.” Yamin Mustafa added that “After marrying my mother, my Dad gave us life, and then he tried to improve upon that.”

Others extolled not only the musical prowess of the virtuoso trumpeter, legendary arranger, genius composer, prodigious producer and stellar bandleader, but also the humility and humanity of the Florida Memorial University director of Jazz Studies who battled cancer for years before passing Dec. 28.

The body of the internationally renowned, locally beloved “Son of South Florida” was laid to rest as fellow musicians and students too crowded his gravesite at the Muslim Cemetery of South Florida in Hialeah, and later the historic Masjid Al-Ansar in Overtown, during his burial and memorial services.

Some present were members of the middle school, high school and college bands that were staples of the annual Melton Mustafa Jazz Festival, returning soon for its 21st year. Others were among the top-notch musicians who had graced the stage with Mustafa in the United States and around the world. Still others were members of his own beloved South Florida Muslim community.

As condolences to the family continued pouring in from as far afield as Russia during the daylong tribute, Mustafa was being eulogized not only as a great musician, but more: a wonderful man.

“I love my brother,” said his sibling Jesse Jones Jr., himself an acclaimed saxophonist. “The last time we talked, he was adamant about how much he loved everybody.”

One friend and fellow musician, Abraham Thomas, reminisced back to his and Jones’ 1956 fifth-grade days at Liberty City Elementary School, and going to practice at the family’s 57th Street home.

“I fell out of love with my horn the way Jesse used to run up and down the scale all day long, and Melton was right behind him on the trumpet, and I could not hang.

“Throughout my life I have always had great admiration for Jesse, and Melton, (and) those of you who are musicians, who felt the love for music throughout their entire lives, and stuck with it. Because music is medicine for the soul.”

He noted that Mustafa and his wife Zakiyyah have produced two more generations of super musical talent in their sons and grandchildren who also are accomplished if not professional musicians and educators.

Family members, who knew him best, offered some of the most poignant insights, as when wife Zakiyyah shared that Mustafa left without any pain, any discomfort.

“He didn’t complain about anything,” she said. “Almighty God took that away from him. When Melton passed the other day, his face was like a newborn baby’s. Nothing that showed any evidence of pain. No stress. Just peace.”

Eldest son Melton Mustafa Jr., director of bands at Florida Memorial, who conducts the Melton Mustafa Orchestra when not playing his own gigs, said that in his travels he has had “many opportunities to work with a lot of musicians and a lot of my dad’s friends. Everywhere I travel, I meet somebody who knows my Dad, played with my Dad or studied with my Dad, learned his solos, or studied under him, some way, shape, form or fashion. And everyone, absolutely, every time, says the same thing: ‘I love your Dad. He helped me out. He’s humble.’”

Mustafa Jr. recalled from his youth his father’s work at a local cultural arts center, often unappreciated, for not a lot of money, “when he could be working anywhere. And at the time I didn’t understand that he was giving back to the community. He was doing something that he wanted to do, and it was important to him.”

Same thing with Florida Memorial University, he said, where his father started and was director of the Jazz Studies program.

“There weren’t a lot of students, just him and a couple of other people, and he was getting calls from all over the world to come teach at this school or that school. But he wouldn’t leave. He didn’t leave because he cared about community. He cared about helping people. And the money wasn’t as important as what he was trying to do for those students.”

His father’s legacy includes not only those students – some now musical headliners in their own right – but his jazz festival.

“Twenty-one years of providing live jazz to the South Florida Community. This is another tribute to him,” Mustafa Jr. said. “Because of who he was and the type of relationships he was building all his life, he was able to bring in the finest jazz musicians – not in the United States, but the entire world – here, so we can enjoy them at low cost. One thing he said about the jazz festival is that there must always be an educational component. And to me that spoke volumes.”

He noted the synergy of the area’s only historic black university – FMU, the only current black big band – the Melton Mustafa Orchestra, and Miami’s historic Lyric Theater – once the only venue where African-American artists could perform, in making a point to invite everyone to celebrate his father’s legacy at the 21st Melton Mustafa Jazz Festival, returning to the Lyric Theater the last weekend in February.

By then the diverse crowd that had packed the mosque had enjoyed food and warm remembrances. Some lamented the loss of their prime Arabic grammar teacher. Imam Dr. Nasir Ahmad, who had led the janaza, or funeral services, and officiated the day’s services, explained that his friend also was an imam or minister.

“Melton was on the staff here at the masjid, and the responsibility for this community rested on his shoulders, when I was not here. So to let you know the dignity we are talking about, he was truly a wonderful man.

He taught me humility. He didn’t show any ego problem. Melton taught me how to be a true leader: Don’t push yourself, push God.”

The classic tune “Song For My Father” has increasingly been heard in tribute to Mustafa. During the testimonials, Yamin, second-best trumpet player in what some have called “South Florida’s First Family of Jazz,” said of his father: “When you think about him, say a prayer.”