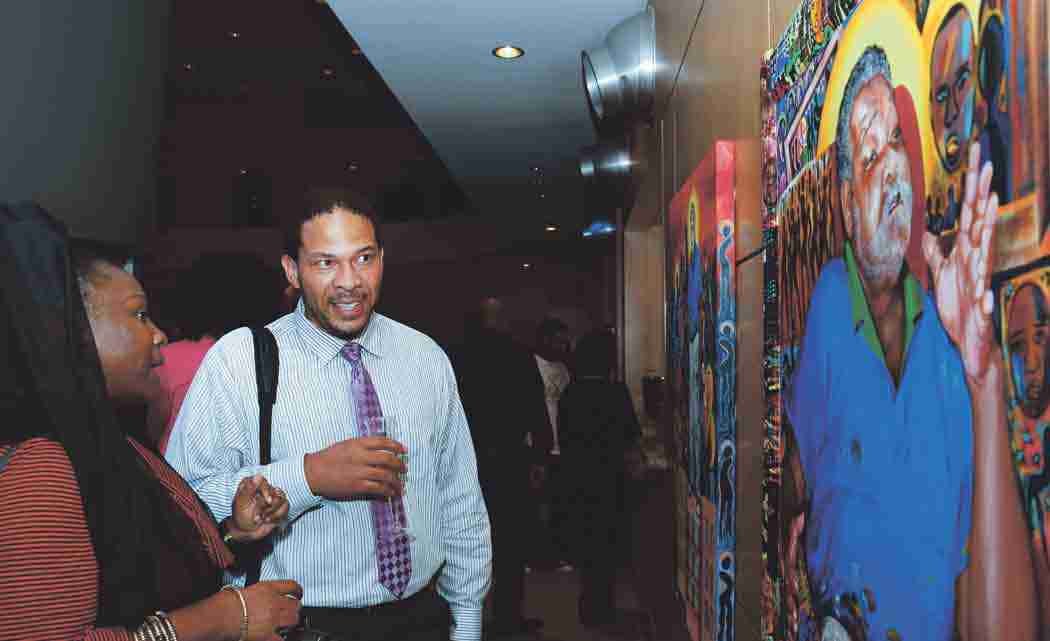 OVERTOWN, FL. — What do you get when you have a historical black venue filled with acclaimed black art being viewed by a predominantly black crowd, many of whom are graduates of Historically Black Colleges and Universities (HBCUs)? For Fabiola Fleuranvil, a dream come true.

Six years ago, Fleuranvil, a marketing executive, was on the verge of returning to Atlanta due to what she saw as a dearth of blackness, especially among her peers – young, African-American professionals. A conversation with Edwin Sylvain, a friend and fellow Florida A&M University (FAMU) Rattler, about her inability to connect with others who looked like her became what is now ‘First Wednesdays South Florida HBCU Alumni Social.’

For Fleuranvil, linking her popular monthly gathering of young HBCU graduates with The Black Archives’ opening reception for ‘A Man Among the People: A Purvis Homecoming,’ was a marriage made in heaven. In addition to introducing many of her peers to black fine art, the event would also be an introduction of sorts to many venturing into Overtown for the first time.

“With this being Art Basel and this year having a huge black presence at Art Basel, [Ed and I] thought that it would be a great idea to host our First Wednesday here along with Soul Basel to give younger people an opportunity to come into Overtown, which we usually don’t do, and to come to the Lyric Theater, which most of us have never been here before. It exposed us to a part of Miami that we’ve never been in,” said Fleuranvil.

Jennelle Griffiths, 29, and Genetta Watts, 30, are first time visitors to the Lyric Theater and they plan to return. Both women are pharmacists and FAMU graduates. Griffiths said she came to the event to “look at some beautiful art work, [and to do some] networking.”

Watts’ motivation for attending was to experience art from a black perspective. “We’re so used to what we see commercially, nationally that’s not really representative of us,” she said. Both said that this, their first black art exhibit, would not be their last.

‘’This is a wonderful event that we look forward to participating in every year,” said Griffith.

An artist whose work got significant attention is Shernette Muhammad. Her portraits of Purvis Young greet visitors as they enter the Lyric’s lobby and offer a beautifully detailed, vibrant and accurate rendering of the artist whose work is the subject of the exhibit.

Muhammad said that she was introduced to Young in 2009 by a mutual friend who wanted the two artists to meet.

“He brought me over to his warehouse, I sat there, spoke with him for a little bit. Learned some things about his art, like the angels that he paints in his work and the horses and why he paints those things,” said Muhammad, who asked Young if she could take the photo from which she eventually painted his likeness.

Besides reinforcing that she has a tremendous talent for painting portraits, creating the Purvis Young pieces helped Muhammad to realize much more.

“People have asked me before who influenced my work and I could never tell them anyone until now, I can finally say an artist that influences my work,” said Muhammad, whose work focuses on conveying positive images of blacks.

Another first time visitor to the Lyric was investment banker, Emilio Coppin, 35, who said he was “just looking to explore a little bit of art, and the fact that it was black art sparked my interest even more.”

Coppin said he’s pleased to see Miami’s black art scene expand. “I lived in New York for seven years prior to Miami so when I moved to Miami that’s what I felt was lacking the most. But I’ve seen the exposure to art increase over the last few years.”

Antoine Myers, 36, who works in accounting, was born and raised in Miami and is also visiting the Lyric for the first time. He said attended the exhibit because “anything that has to do with my culture I want to support.”

As he enjoyed the exhibit’s art, especially ‘Revolting Hearts: The Terrorizing of Unarmed Males’ by JaFleu, Myers sent text messages to other friends to encourage them to join him.

“I had a great time. This is a really laid back, marvelous atmosphere. I will be back and I will bring others.”

Fleuranvil said the enthusiasm of the exhibits’ patrons is an indication of black Miami’s future.

“This year’s Art Basel is a sign of what’s to come with black Miami, black art. We’re in a renaissance. I thought last year was big as far as black exhibits, black art, but this year is huge. We’re probably going to start to see a transformation of how black is represented here in Miami.”

Next post Art festival lights up Amsterdam in dark winter