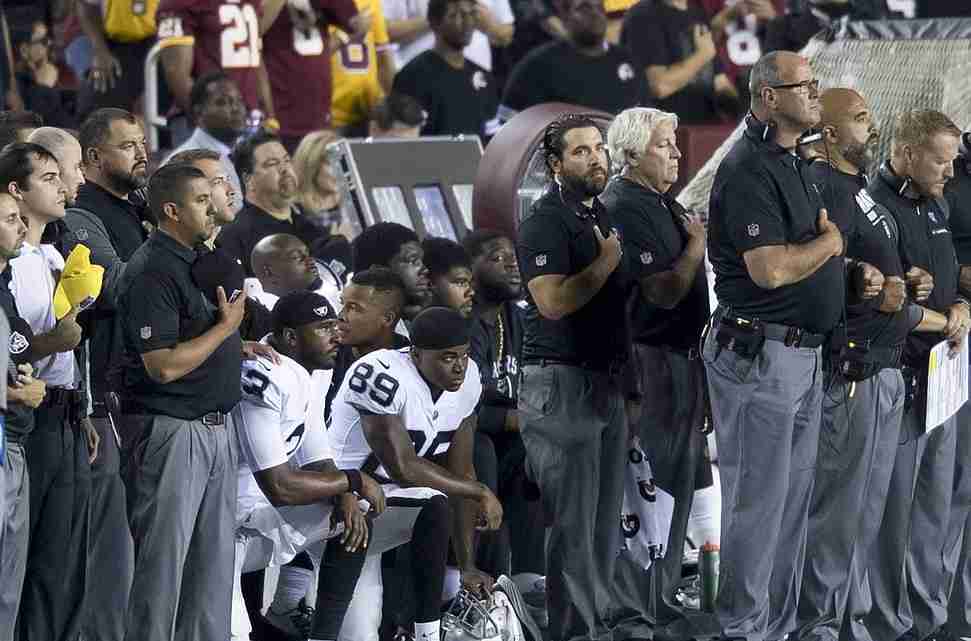 FLORIDA – Last week President Donald Trump referred to NFL players who kneel as “sons of b***hes,” igniting a movement wherein entire teams, and their owners, have been taking a collective knee before and/or during the national anthem.

It has sparked a debate about whether or not players are disrespecting the flag or bringing much needed, widespread attention to issues that have affected blacks since this country’s founding so America will finally listen.

Everyone seems to have an opinion one way or another. Some say its offensive to the military, while others say it is necessary to bring awareness and change. Still others think it is a distraction from the fact that Colin Kaepernick, who began taking a knee last season to protest racial discrimination and police brutality, is still unsigned and being black balled from the NFL. They called it a ploy to get people who were boycotting the NFL because of Kaepernick to tune in.

With so much chatter flying around, we decided to poll our readers on Facebook and find out what they thought about the NFL taking a collective knee. Here are some of their thoughts:

Vanaya Bredy, Cooper City: “Well I believe there was a behind the scenes conversation to stand united and force us to believe that there was solidarity in the NFL. Everything as I look at it now appears to be staged and a part of the status quo. Present a united front, get them to stop focusing on what Kap originally took a knee for and change the narrative going forward. In other words … it’s BS.”

Everett Evans, Miami: “His methods may not be conventional but effective. Seem like everything he say or do (sic) he bring people’s (sic) closer together. Look at it owners, coaches, teammates, if he wouldn’t have spoke (sic) out negative or positive, they wouldn’t have been holding hands or arms or kneeling down in solidarity.”

Vensen Ambeau, North Miami: First of all, the president’s comments were egregious. In that he insulted people for doing what people in the military fight for us to have … FREEDOM. He chooses not to hear anyone but people who think, act, and speak like him. For those who hold differing thoughts he dismisses them and calls them un-American. This is a tactic that speaks to his base. As it relates to the NFL, I think he helped the ratings. I’m sure more people tuned in to see how teams would demonstrate. Shannon Sharpe gave an interesting commentary on the demonstration by these owners and athletes. He questioned the NFL, “what are you protesting against?” He suggested that they were protesting because President Trump was telling them what to do. And one thing about rich people, they don’t like being told what to do. The issue still remains unattended to, which is the injustice that a group faces because of the color of their skin. That’s what Kaepernick was fighting for, in many ways, to help us as Americans align more closely to our ideals. But oddly enough, we all don’t seem to share the same ideals for America. Lord help us all.”

James Mungin II, Miami: “It was sorry, ain’t no one sacrifice anything … it was a safe space for people who didn’t want to be placed in an uncomfortable situation and everybody still missed the point of Colin Kaepernick kneeling in the first place.”

Vanessa Woodard Byers, Miami: “Don’t allow racists to reframe #TakeAKnee as being a debate about patriotism, the national anthem and the American flag. It is a protest about police brutality, racism and oppression. #wakeUP #STAYwoke”

Meka King, Orlando: From now until justice is served … #takeaknee. We’ve fought this fight before. Unfortunately we are still in the battle. NFL Players, THIS means more than any win today! Thanks to those of you who refuse to be silent and are willing to take a STAND! We see you! History sees you!”

Kerline Jules, Miramar: “It’s not a protest against the military, flag nor anthem. It’s about standing against injustices & inequality. #TakeAKnee”

Rodney Royal, Miami: “Scrolling through Facebook posts I can clearly see that there is a fence between those who feel taking a knee is great and those who feel it is disrespectful. Speaking as a black man who’s raising black boys, I am proud of every player who chose to take a knee during the anthem.

Let’s not forget the original reason that Colin Kaepernick began his protest is because people of color have NEVER been treated fairly in the United States, past and present.

We have been hated simply because of the color of our skin. These days the mistreatment of African-Americans can be seen on video across this nation and seldom is there a conviction. If you’ve never been nervous or scared when a police car pulls up behind you even when you know that you’ve done nothing wrong, you may not understand the thoughts that go through our minds at that moment. We all pray that we make it home ALIVE because a broken tail light may cost us our life (sic). So, for the President of the United States to say these players (black players) are SOB’s for taking a knee, he doesn’t understand and simply doesn’t care about all who reside in this country. He claims his statements aren’t about race, but clearly they are because everyone knows that the NFL is predominantly black. For all those saying that the athletic arena is the wrong place for a “PEACEFUL” protest, tell us where should it take place? It’s the best place because it’s guaranteed to be seen by millions. Once again, it’s not about the flag, it’s not about the anthem, it’s no disrespect to our veterans, it’s about the injustice that black and brown people deal with daily in this country. Also for those saying that the athletes make millions, they absolutely do because they’ve worked for it and deserve it. Also understand that those same millions of dollars doesn’t (sic) shield them from the injustice that takes place to those who don’t have millions. One last thing, if Obama said anything close to what this current President has been saying since the election, he would’ve never became #44. Feel free to comment! #takeaKnee #ImWithKap #boycottNFL #dumptrump #Ivoted”

Christopher Mattox, Coral Springs: “Sunday’s “protests” at NFL games were just ‘aight.’ (sic) Like when you get that red velvet cake that looks oh so delectable only to discover on first bite that it’s just chocolate cake with food coloring. I fear the purpose for the protests is getting lost in the sauce. Yesterday’s protests were more about standing up to Trump then (sic) taking a knee against police brutality and racial injustices in our legal system, and in the end Colin Kaepernick still doesn’t have a job. So, what was yesterday really all about? First, it was a powerful sight to see so many players and owners and staff standing together in solidarity. I just would have preferred if this had happened a year and a half ago when #7 quietly began a personal protest that resonated with so many of us. Yesterday, folks locked arms, some kneeled, and others were just there. Where were all these people when Kaep began his protest? Owners came down out of the luxury suite to lock arms with their players, whom Trump had just denigrated as sons of bitches. These same owners though have done their level best to stay away from Kaepernick and more importantly to steer clear of his message that racial injustice permeates the legal system. He was bad for business, a distraction, a has been malcontent. I believe the owners were locking arms for another reason. I hate being so cynical, but the way my neural pathways are set up … The president of the United States had just attacked their business (I.e. Their pockets). He called for fans to boycott games until players stopped protesting. Aside from the fact that owners can’t fire players for peaceful protest and remain the patriots they portray themselves to be, 90% of their labor force is Black. Without the players they have no league, no games, and no billion-dollar enterprise. There are definitely some owners who understand the protests and the temperature of the nation. Stephen Ross of the Miami Dolphins is one. If an owner didn’t mention racial bias in policing and use of force in his statement, then he was out there protesting an attack on his livelihood. In my opinion …”

but choose the side of leadership only because they have influence. Sometimes it is a double-edged sword and our response dictates change or creates new levels of confusion and a legacy of pain-filled, misdirected pride. The president may have mis-stepped, but we must as the forgotten minority, American or celebrity step higher by leading with love and actions of forgiveness. I get that we have leadership in the country, but a lot of people that’s responding are responding from the posture of MLK and MLK was a spiritual man so if you’re going to respond from his posture, you have to live his posture. It’s like they’re tying racism into what Trump said and every time somebody white says something it doesn’t have to be about racism even if he’s racist. Even if you don’t agree with a world leader you have to respect that world leader. You have people calling the president a bum, but if he responds back and calls somebody a nigger, then they’re going to be mad. People can’t choose to take away other people’s freedom to respect the president.”

Previous post NBA players want change, and now must decide how to proceed