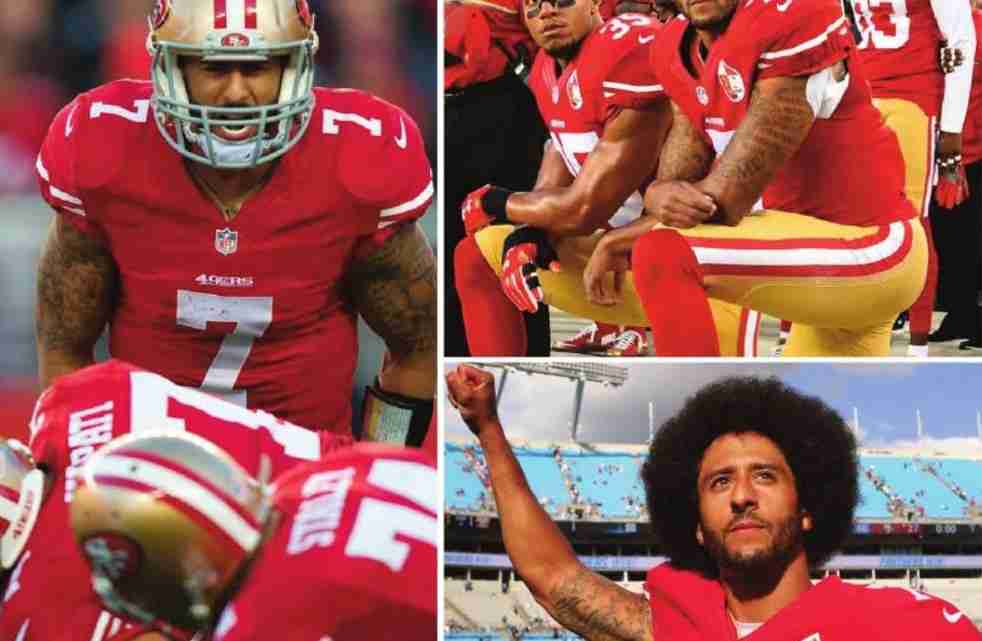 PHOTOS COURTESY OF SPORTS BLOGS, THE JR REPORT AND THESHADOWLEAGUE.COM

Unless you’ve been living under a rock, you know about the NFL vs. Colin Kaepernick saga. In case you have (been living under a rock that is), the talented quarterback remains unsigned by an NFL team and many believe he is being blackballed for taking a knee last season during National Anthem in peaceful protest racial inequality and police brutality America.

Specifically concerning police officers murdering unarmed black men and being acquitted thereafter, Kaepernick called for more accountability and a cease to the loss of black lives.

Now, despite still being able to add value to any NFL team, no one has signed Kaepernick, who became a free agent season. And people around the country have their opinions about why.

Richard Sherman, cornerback for Seattle Seahawks, said the NFL was sending a message through Kaepernick. In interview with USA Today, he listed quarterbacks in the NFL that he thought were worse than Kaepernick.

“It’s not about football or color. It’s about, ‘Boy, stay in your place,’” Sherman told USA Today.“He played in Chip (Kelly)’s system last year and went 16-4 (TD-to-INT ratio) a bad team … He played well because a good football player. He may not be best, but he’s better than a lot of these dudes starting.”

“Colin Kaepernick doesn’t need a second chance because he’s done nothing to mess up his first chance. Have we reached point that we look down upon, we scoff, ostracize a man that takes a knee in protest more so than a domestic abuser or some these offenses that some of these NFL players (have committed)?” Sharpe said.

“In the end they can’t get past that he disrespected the flag. … I think most people, if we can say, most white people, deep down they know he’s right. Deep down they know Colin Kaepernick stood for something he should have stood for, that he had national impact that needed be had at that moment,” Bayless said.

But, according to The Associated Press, NFL Commissioner Robert Goodell said Kaepernick is not being blackballed.

“No, teams make decisions (based) on what’s in the best interest of their team … and they make those decisions individually,” Goodell reportedly said.

Many people aren’t convinced of Goodell’s words. Rallies have been organized and a petition to boycott the NFL if Kaepernick isn’t signed using the hashtag #NoKaepernickNoNFL, which has garnered over 130,000 signatures, is being circulated.

With so much chatter, South Florida Times cided to poll South Floridians to see what thought about the ongoing saga regarding Kaepernick and here’s what some of them had to say:

Lionel Lightbourne, Miramar:“NFL ownership are more tolerable of criminal disobedience than they are of civil disobedience. They’ll tolerate a player knocking his wife to her knees but won’t tolerate Colin taking a knee to protest injustice … If governments are to citizens what parents are to children; then Colin has the right to protest a government that mistreats its African American citizens like a parent who abuses or in some cases molests its children. Colin’s protest is a reflection of many injustices that take place in homes across America of frightened dependents who rationalize being abused or molested by an advocate.”

Matthew Joseph, Miami Shores: “Colin Kaeperknick is forcing America to deal with its perception vs. its reality. It’s clear he is more than qualified and if highlighting an ongoing national ill is not patriotic then I have no idea what people think patriotism is. Last I checked (Muhammad) Ali was a hero … but also vilified while alive. … Hypocrisy is a national disease.”

Felecia Hatcher, Davie: “So your employer treats you like sh*t and doesn’t renew your employment contract then people rally behind you to help you get hired by the same company? The conditions have not changed. … It is (unfair) of course. But it unfortunately has not been effective for him. The fact that he hasn’t gotten support from his peers is the bigger issue.”

Janey Tate, Miami Gardens: “I think it’s unfair and he’s being used as an example so others don’t demonstrate in that way … (The) only thing he’ll have on his side is history, if it’s told correctly. People will look back and respect him but today he pays … The only player I saw speak on his behalf recently was Richard Sherman.”

Rebecca Vaughns, Miami: “I don’t think no way. That’s where he wants to be but it may not be written in the book of his life! Never limit how you get money. When things are denied to you it’s for a reason known or not. … It’s a different era than Ali, Malcolm, and Martin! Today’s black folks mindset is they got bills to pay and don’t want to risk them BIG DOLLARS! If he had strong support by his peers, then he would be picked up. If he had a Marilyn Monroe, then he’d be picked up. She refused to attend a popular nightclub back in the day if Ella Fitzgerald could not attend and perform there. People don’t like losing good money and prestige! If several top quarterbacks and a few heavy hitter running backs stepped up and said they were not playing if he wasn’t signed, then it would make a difference. That ain’t happening.””

Delvin Rogers, Tamarac: “I think it’s a disgrace. He did a peaceful protest, didn’t hurt anyone, you never heard about him in the news as far as DUI’s, gun charges, drug possession during the season or off-season. He simply took a knee for what he believes in, and that’s injustice. (What) the NFL and the owners have shown is the slave mentality of what you can and cannot do, while Black. Let’s just keep it real. I read the owner of the Dolphins transcript as he stated that he is all for the cause and understood what Kaepernick was doing and that he was supportive. Supportive my a**, you had a chance to sign him and you didn’t because … Save me the BS that Cutler knows (Adam) Gase and that he is familiar with the style of offense. This is black balled to the highest degree. Shannon Sharpe said it best, Kaepernick doesn’t deserve a second chance because he did nothing wrong with his first chance. … And furthermore, you haven’t heard one single thing from the Players Union. Whether this is a union issue or not, where y’all at?”

Cedric Dawkins, Miami Shores: “It’s disgraceful and very mafia style of the NFL to demand how people express themselves. There are many coaches whom have expressed interest but the owners forbid them to hire him. What kind of BS is that? There are players in the league with ALL types of felonies. All this man did was kneel silently in protest of the state of minorities in this country. However, they see that as more of a threat than a reformed rapist or murderer. And as much as I love RAY LEWIS and MIKE VICK; they are the LAST ONES that should be speaking on anybody’s fate in the NFL! How quickly they forgot those jail cells SMH …”

Charisna Jorelus, North Miami: “GM’s make decisions that their fans will like and would agree with. There are some that may have hated the attention Colin brought to the team but overall, it is about the fans paying money. Quarterbacks, after all, are the face of the team. Fans like entertainment more than they like to face what is reality.”

Here are a few quotes from people don’t reside in South Florida that deserve honorable mention:

Rykiell Rhea-Turner: “Does he want to continue to play for the NFL, sorry, I haven’t heard from Kap himself … I too agree that he will be just fine without continuing to play for an industry that doesn’t really want him within a system that isn’t really interested in black liberation or interests. Nothing wrong with creating a liberated black football league, perhaps one already exists but doesn’t get noticed like NFL?”

Carlito Sanchez, Redondo Beach California: “I’d rather he not play either, as opposed to playing and then standing up for the national anthem. That’s equivalent to the scene in roots, where Kunta Kente keeps running away and then the slave catchers finally catch him and beat him so bad, that he finally gives up his identity and goes from Kunta Kente to Toby! That’s that B.S.!”

Please Note: Due to this poll being taken of Facebook, some quotes have been slightly edited grammatically for brevity and clarity.

Previous post Could research in Keys give coral the second chance it needs?