Spirits and food a draw for Lauderhill chamber 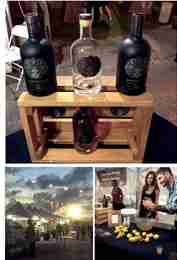 Spirits such as Afrohead Rum were available at the Sola Rum, Food & Wine Festival, a brainchild of the Lauderhill Regional Chamber of Commerce.

The line in front of the Doc Brown’s Really Bad Rum booth was long in spite of the name that could have turned off tasters.

When patrons at the SOLA Rum, Food & Wine Festival got to the front of the line, they were given samples of smooth, good-tasting rum and rum-infused cake. The booth had barbecue sauce, too.

The Browns, who hail from Riviera Beach, started out by making the rum cakes after Doc Brown ended a 25-year career with the Walt Disney Co. in the radio department.

“Instead of promoting the rum we were using we decided to make our own rum, which took us on a whole other adventure,” said Susan Brown. “But everything led us here to South Florida. We make the rum cakes in Miami and the barbecue sauce in Orlando.”

Doc Brown’s Really Bad Rum was one of 18 vendors at the SOLA Rum, Food & Wine Festival held Saturday, Feb. 10 on the grounds of the Lauderhill Performing Arts Center in Broward County. Added to the spirits and the good food was live entertainment from Carl Thomas and Tony Succar.

The event was the brainchild of the Lauderhill Regional Chamber of Commerce, whose past president Maria Munro visualized SOLA’s impact on the area.

Munro wanted to “create an event destination that would attract visitors into the region … to experience a positive and festive atmosphere, particularly in Lauderhill,” said event spokeswoman Natasha Sweeting. The event would “also highlight the multiple cultures that make up the city through food, music, collective engagement and community businesses.”

Vendors represented countries such as Spain, Panama and the Bahamas.

Isaac Grillo offered tastings of the Harbour Island, Bahamas’ Afrohead rum that had been aged seven years, then laced with fresh lime and ginger.

Grillo tells the story of Toby Tyler, who moved from his native Australia to the Bahamas and fell in love and married a Bahamian woman, whose mother was the first Miss Bahamas in 1963. He also fell in love with rums of the islands. He started making rum, only with a label of the silhouette of the hair of his wife’s mother. People in Briland, the local’s name for Harbour Islands, started calling the rum Afrohead. Soon the name was adopted and later the company was formed a little more than 10 years ago. The company sells a 15-year rum as well as the seven.

Next post Black veterans to discuss World War I