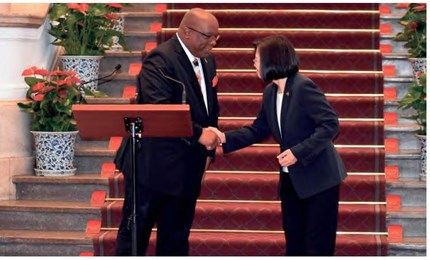 TAIPEI CITY, Taiwan – The Government of the Republic of China (Taiwan) rolled out the red carpet in honour of the visit by Prime Minister of St. Kitts and Nevis, Dr.

the Honourable Timothy Harris, who is on a five-day official visit to that country this week.

Prime Minister Harris, who arrived in Taiwan on Monday, April 15, was officially welcomed to the country with a 19-gun military salute by the Honour Guard comprised of Taiwan’s armed forces. The military salute took place at the Presidential Office Plaza.

The military honours ceremony was attended by officials representing the highest levels of the Taiwan government, including President Her Excellency Dr. Tsai Ing-wen; Vice President Chen Chienjen; Minister of Foreign Affairs, the Honourable Dr. Jaushieh Joseph Wu and other ministers of government, as well as representatives of the country’s diplomatic and consular corps.

Prime Minister Harris stated that Tuesday’s impressive military display by the Taiwan Guard of Honour was, in his opinion, a clear representation of the strong bond of friendship that already exists between both countries.

“Ours is a diplomatic partnership that has spanned over 35 years and keeps growing stronger as we promote shared fundamental values, such as democracy, good governance, human rights and the rule of law. Indeed, our two countries may be far apart geographically, but importantly we align very closely on meaningful issues,” the St. Kitts and Nevis Prime Minister said.

“Through cultural, educational and scientific exchange, as well as other impactful programs, our countries have built an enduring legacy of cooperation that defies distance and embraces empathy. As a result, a sense of like-mindedness and mutual understanding permeates our longstanding relationship.”

Dr. Harris reiterated to President Tsai and the Government of the Republic of China (Taiwan) St. Kitts and Nevis’ highest esteem and support for their country.

“The Government and people of the Republic of China (Taiwan) can count on St.

His office said the Prime Minister Harris will use the five-day visit to further solidify the strong bond of trust and friendship between the governments and peoples of St. Kitts and Nevis and the Republic of China (Taiwan).