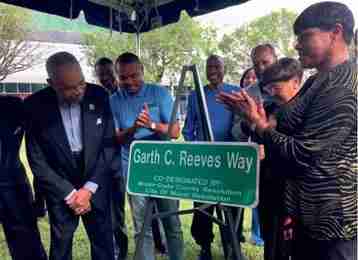 MIAMI – Not everyone lives to be 98-years-old, and if they do, they certainly don’t all do it with the swag and prowess of Garth C. Reeves Sr.

On Friday, Nov. 3, the iconic living legend was honored with his very own street – Garth C. Reeves Way – located at NW 6 Street and NW 2 Avenue near the Black Archives History and Research Foundation of South Florida where he is a board member.

As publisher emeritus of The Miami Times, which his father Henry E.S. Reeves founded in 1923, Reeves has been instrumental in telling the stories and turning the tide of Black Miami for most of his life.

Among his long list of accomplishments are helping end segregation on Miami’s beaches and golf courses as well as being the first black board member at Miami Dade College.

He was inducted into the National Association of Black Journalists (NABJ) Hall of Fame earlier this year.

During the ceremony, family, friends and other community residents highlighted Reeves’ impact on Miami.

“Every time I see Garth Reeves, I remind him that my first job was working for him,” said James McQueen, who served as MC.

“Garth was famous for bringing people in who were needed to get the job done and he did it on several occasions,” said Dr. Dorothy Jenkins Fields, founder of the Black Archives. “Now my dear friend, for one who has done so much, for so many, for so long, I say you deserve this and much more.”

“He was a game changer to the Miami community during the Civil Rights Era … I can’t recall a week The Miami Times didn’t come out,” said Vice-Chairwoman of the Miami-Dade County Commission Audrey Edmonson.

When he stood to address the crowd, Reeves said he was going to live to be 100 because he’s talked to God about it excessively.

“People make too much of my age, but I’m gon’ make 100. I’ve pressed God a lot about it,” Reeves said, noting how excited he was to receive the honor of the street naming. “I see a lot of my friends and I’m glad they came out to wish your old boy luck because 98 is nothing to play with. … I don’t know what to say, I’m just so damn happy.”

He got emotional when he spoke about his daughter, Rachel Reeves, who could not make the ceremony due to being ill.

“One thing I miss is my daughter. I have one (surviving) child and she couldn’t be here today, but we’re here with you Rachel,” Reeves said.

As he spoke, Reeves announced he would be donating $45,000 to the Black Archives.

“Though I sold my papers for a nickel, I’ve made some money in this town. This town has been good to me and I wanted to give back. Everybody should have that idea,” Reeves said.

He also assured the crowd that The Miami Times would continue serving the community.

“We’ve been telling your stories and we’re going to continue to do that,” Reeves said.