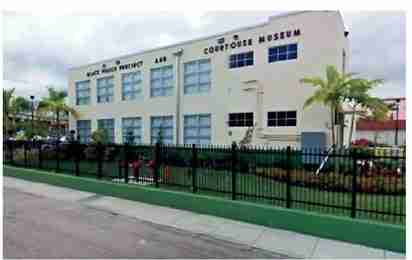 Originally opened as a jail and courthouse for blacks in the 1950s, the City of Miami’s Historical Black Police Precinct and Courthouse reopened as a museum in 2008 and remains the only building of its kind in the country.

MIAMI – Terrance Cribbs-Lorrant, 38, has spent his life fighting for his community.

Whether serving with non-profits, singing about injustice or helping save youth from the inner city streets, it’s not uncommon to see Cribbs-Lorrant working tirelessly to make Miami a better place.

Now the self-proclaimed “community improvement specialist” has assumed a new role in which he continues serving others, just in a different capacity.

On May 22, 1950, the precinct opened as a separate and segregated jail and courthouse where Miami’s black police officers worked to patrol the community. Judge Lawson Thomas – who was sworn in as the first black to hold public office in the south – presided out of the precinct.

Though the precinct closed in 1963 when Miami’s police department was integrated, it was reopened as a museum in 2008 to preserve the history and legacy of black officers and their significant contributions. It was (and remains) the only building of its kind in the country.

According to its website, the museum’s mission is to “acquire, preserve, display, and promote collections of a historical nature that will be of educational value to the preservation of African American history.”

The mission also speaks to capturing struggles and accomplishments of Black Police Officers in Overtown, who served during the pre-Civil Rights era of the 1940’s, 50’s and 60’s.”

As the new director, Cribbs-Lorrant believes it is his duty to guard that history and expand the knowledge of it.

“What I’m hoping to bring to the museum is awareness, but also highlight the activism of the officers by telling the stories of not just the five (first black officers), but other officers who served in the community, all the way down to the connection that these patrolmen had with government,” CribbsLorrant said.

He said he is leery of only calling the museum’s history that of ‘African Americans’ because Caribbean culture played a huge role in Miami’s history.

“There was a large group of Bahamians who migrated here to Overtown and many of them served as patrolmen during that time,” Cribbs-Lorrant said. “Everybody is categorized as being African American and when we do that we neglect to tell the full story or recognize the cultural spectrum of where people’s interests lie. You weren’t just dealing with African Americans, you were dealing with Caribbean Americans as well. There’s a different outlook of how you do things when you add culture into it.”

He said, like much black history, the officers’ contributions supersede historical records of them.

“The first five patrolmen weren’t trained as officers. They came from various fields.

Today the museum offers guided historical tours for $15, rental space for meetings and community events, ball and chain weddings, training on what do when stopped by the police and more. Children age five and under are admitted free.

If residents take the tour on Tuesdays, they’ll have the honor of being guided by 92-year-old Lt. Archie McKay, a retired City of Miami police officer who actually worked out of the original precinct.

“He is my role model. He is a living legend. He and Clarence Dixon, who became the first black police chief for the City of Miami, are my models for this museum,” Cribbs-Lorrant said.

The museum has also launched Girl Scout Troupe 1877, which Cribbs-Lorrant said mirrors one the community had in the 1960s – and he is working to add other initiatives including training on how to prepare for jury duty.

Cribbs-Lorrant hopes residents and tourists will take advantage of the museum’s current resources and the opportunity to learn more about Miami’s black history.

“I want everyone from black to white and various cultures … to be able to find their space in this history and see how they benefitted from what these officers did,” Cribbs-Lorrant said. “Many of them went on to do great things so telling that story, telling their individual stories, is where I look to bring the museum. I want to put faces with the stories.”

Next post Local club fights to stop violence against women