Texting ban may soon be enforced on Florida’s deadly roads 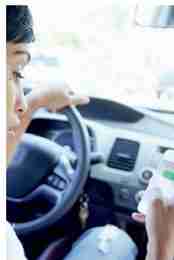 Texting while driving may soon be outlawed in Florida

They speed up and slow down for no obvious reason and get too close to other cars. They endanger their lives and others.

“There’s one,” he says, as a woman zips past. But even though he could see her texting, he couldn’t ticket her – Florida statutes wouldn’t allow it because she wasn’t breaking any other traffic laws.

Florida, with some of the nation’s deadliest roads, is one of the last states to not fully ban texting while driving, but the Legislature will soon consider a bill that would. However, studies conflict over whether such bans have any effect.

Currently, Florida law says texting by noncommercial drivers is a secondary offense – law enforcement officers must see another violation like speeding or an illegal lane change before they cite a driver for texting. The bill would make texting a primary offense. The fine for a first offense would remain $30 plus court costs and add no points to the driver’s record.

Previous attempts have failed, but this bill has support from legislative leaders.

Forty-three states already make texting while driving a primary offense. Three besides Florida list it as a secondary offense – Nebraska, Ohio and South Dakota. There is no state law against texting in Arizona, Montana and, for noncommercial drivers 22 and older, in Missouri. The federal government estimates that in 2015 accidents involving texting and other distracted driving killed almost 3,500 people nationally – more than nine per day – and injured almost 400,000.

A Florida trooper, Carlos Rosario, was seriously injured in March when investigators say a texting driver struck him as he worked along a Miami highway shoulder. Rosario spent two months in the hospital undergoing several surgeries to repair injuries to his face, spine and legs. He will remain off duty until at least late 2018.

“You see it every day when you are out driving – people texting. It has become part of our culture,” said Democratic State Rep. Emily Slosberg, one of the bill’s sponsors.

She was seriously injured in a 1996 traffic accident caused by a reckless driver that killed her twin sister, Dori, and four other teens. Her father, former state Rep. Irv Slosberg, long pushed traffic safety bills including the state’s mandatory seat belt law, and she has picked up the mantle.

“It is time for the Legislature to send a message that we will no longer accept this deadly behavior on our roads,” she said.

The state says Florida car crashes killed almost 2,700 this year, but the number killed in texting-related accidents is unknown. Under the current law, only about three drivers a day are cited statewide for texting while driving.

According to Insurance Institute for Highway Safety statistics , five of the seven states without a primary offense law had 2016 highway death rates above the national average. Ohio and Nebraska were below; South Dakota and Missouri were just above. Florida, Montana and Arizona tied for the ninth-highest fatality rate.

Minorities fear texting bans lead to racial profiling. State Sen. Perry Thurston, a Fort Lauderdale Democrat, said the law would save lives but he is concerned some officers would stop mostly black drivers. If the law is adopted, he wants statistics collected to make sure minorities aren’t disproportionately ticketed.

An American Civil Liberties Union study showed that after Florida made driving without a fastened seat belt a primary offense in 2009, black drivers were significantly more likely to receive tickets than white drivers even though studies showed blacks were only slightly less likely to buckle up.

“It’s disappointing but the reality in some communities is that this is an issue,” said Thurston, an African-American.

Next post Peacemaker works to stop bloodshed in Baltimore