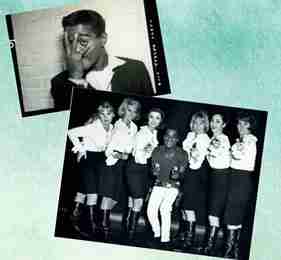 The documentary, “Sammy Davis Jr.: I’ve Gotta Be Me” will screen at the Overtown Performing Arts Center Feb. 16.

The rich history of music and entertainment in Overtown provides a perfect backdrop for the Black Lounge Film Series set to kick off on Feb. 16.

The debut film in the series will be PBS American Masters’ “Sammy Davis Jr.: I’ve Gotta Be Me” which will be screened at the Overtown Performing Arts Center.

Directed by Sam Pollard and filled with star-studded interviews, the documentary is the first to examine Davis’ immense talent and his journey for identity through the shifting tides of civil rights and racial progress in 20thcentury America.

The creator of the series is HaitianAmerican filmmaker, Rachelle Salnave, a 2016 Knight Arts challenge recipient.

“Artists tell our stories, and we’re delighted that the Black Lounge Film Series will bring these stories to the big screen and the community, helping us to remember the past, explore our present, and dream of what can be,” said Victoria Rogers, vice president for Arts at Knight Foundation.

The film showcase will be held monthly, and also include free quarterly outdoor screenings at Gibson Park and a Speaker Series at Culmer Library, both located in Historic Overtown.

“In the 1960s, Overtown was often referred to as the ‘Harlem of the South,’ with many Black musicians and artists using it as a creative and restorative pit stop during their journey’s across the country states,” Salnave said. “By anchoring this new film series in Overtown, we can hearken back to these storied days while ensuring that a legacy of Black creative excellence is restored to this community and not displaced.”