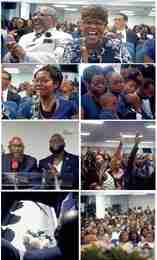 Kaneil D. Jones was remembered as a humorous, community pillar who loved God, his family, music and people in general.

WEST PARK, Fla. – Saying Kaneil D. Jones was well loved is an understatement. By all accounts the 35-year-old “gentle giant” who died September 1 was a humble community icon.

A line to get into the parking lot and a standing room only crowd filled the sanctuary and overflow rooms at the Koinonia Worship Center & Village before Kaneil’s home going service even began Saturday, Sept. 16.

The diversity of the crowd reinforced the impact Kaneil, affectionately called Neil, had on the South Florida community and abroad during his lifetime.

The ceremony began with a final viewing followed by The Jones Family entering the sanctuary. While some attendees had tear stained faces because Kaneil would be missed, it was obvious the funeral was a celebration of a life well lived.

Befitting of Kaneil’s lifelong love affair with Jesus, music, his family and friends, the ceremony included praise and worship, scripture readings, several musical tributes, a humorous and heartfelt tribute from his brothers Derrick Jones and Fla. Rep. Shevrin Jones; and a touching message from his father, Rev. Eric H. Jones, founder and senior pastor of Koinoniaand mayor of the City of West Park.

“Kaneil was a worshipper. He’s already with the King. We’re trying to get there. This is not a funeral, it’s a celebration,” Shevrin said before leading gospel songs like “Freedom” and “Nobody Greater.”

“This is not for Kaneil, this is for us … He loved his wife; he loved his children; he loved his family, but most important he loved God,” Derrick said after sharing humorous stories about how happy he was to have an “in-house playmate” after Kaneil was born. “God is not looking for perfect people, he’s looking for pressing people so press, press, press.”

“Sometimes you don’t know the value of what you do until you need it to come back to you,” Rev. Jones said. “Our son was entrusted to us. We were only caretakers, custodians. We were to watch over him until God came back for him.”

“I’m a (sic) tell you, this (is) a new kind of hurt. If you’ve never been there, you can’t tell nobody (sic) you understand. You really don’t know what you believe until its time to believe it,” Rev. Jones continued. “What I’m going through, it’s gon’ help me. A revelation God gave me through pain and tears was ‘If you can’t trust Me when you’re weak, you never trusted Me at all.’”

Eric and Bloneva Jones in Hollywood, Fla. As the second of three sons, he spent his childhood in Miami Gardens.

As pastor’s sons, Kaneil and his brothers spent all their lives in church. Raised with this strong spiritual foundation, Kaneil accepted Jesus Christ at an early age and dedicated his life to serving the Lord. He was actively involved in various ministries at Koinonia throughout his life.

He loved music and began playing the drums at a very early age. It became a lifelong passion that he used to minister to, encourage and uplift others.

Together they had two sons, Kaneil Jr. (KJ) and Greyson.

In 2012, he received a Pharmacy Technician Certification from Atlantic Technical School and began working at the Cleveland Clinic in November 2016.

Despite his evident musical gifts and professional training, Kaneil was most known for the impact he had on people.

LOVE FOR PEOPLE ON FULL DISPLAY During the service, everyone marveled at how Kaneil was able to stay in touch with and bring joy to so many people.

“The bonds between these three brothers were an example to siblings across the country,” Wasserman Schultz said.

“He was a pillar for his family and community,” McGhee added.

“Kaneil is a textbook example of a gentle giant. A great man has fallen in the City of West Park, in the state of Florida,” Robert Stanley said.

“Kaneil was everybody’s best friend. He supported everybody,” said Dwayne Bennett, a fellow musician. “Kaneil is teaching us all the true meaning of unity, especially in the music community. There was no way possible that one person could stay connected to so many people.”

When asked how his family felt about the massive outpouring of love and support after Kaneil died, Shevrin said it made him realize how much his brother truly impacted others, even those who didn’t know him personally.

“I noticed that my brother, he wasn’t an elected official; he wasn’t this person that people deemed as a famous person, but he had a fan club of so many that extended outside of just our church and outside of his normal group of musician friends,” Shevrin said. “It was evident even people who didn’t know Kaneil just wanted to be a part and be a support. Kaneil created a bridge for so many that people just wanted to be a part of the celebration. That was a good place to be. Even if I didn’t know him, I would have just wanted to be in the number. I think he smiled. I know he smiled.”

When asked how they will continue to move forward after losing Kaneil, Shevrin said it’s what his brother would have wanted.

“We have to … He was very adamant about not stopping the show for no (sic) one person,” Shevrin said. “It’s been difficult these past two weeks, but Kaneil would’ve been like, ‘Man if you don’t get up and do some work.’ That’s not to say we don’t have those moments when we feel human, but we know for a fact where our help comes from and where our strength comes from. We find greater strength in God. You mourn, but you don’t mourn as a person who has no hope.

We’ll miss him, but the strength comes in knowing we know where he’s at and we’ll see him again.”