This black techie is making history FROM SOUTH FLORIDA 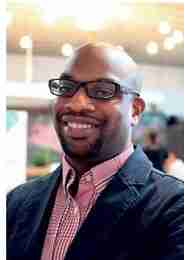 Brian Brackeen learned from three generations of men in his family that failure was not an option. As founder and CEO of Kairos – the only black-owned emotion and facial recognition technology company in the country – Brackeen isn’t only succeeding, he’s making history while doing it.

Kairos was birthed in late 2011 after Brackeen said he looked up one day while working as a senior project manager at Apple and felt like his soul was at stake.

“I felt like I didn’t have a choice really. I remember sitting at my desk at Apple one day and just feeling like my soul was being sucked into the lights above me,” Brackeen said. “I loved it, but I knew I had my own visions and my own dreams and I had to take a leap and work for myself.”

After his engineer dad brought home a computer when he was eight, Brackeen began coding. It didn’t take him long to fall in love with it.

“I just knew it was for me. Everything made sense with technology. Other subjects in school I was terrible at,” Brackeen said.

The 38-year-old tech innovator found many role models in his family lineage to inspire him. His great, great-grandfather, grandfather and father are cited in the Federal Register for putting down a cholera outbreak in segregated Texas; became a millionaire in the 1950s and opened up schools and churches around the world; and had an all-white staff who worked as a manager of data processing in the 1950s, respectively.

“It certainly starts with family. They all had it theoretically harder. Society was very different – in the times that they did what they did, so they don’t give me any excuses for not being successful,” Brackeen said.

He admits his initial idea for Kairos was not to do facial recognition, but pivoted after realizing the opportunity in the industry. He advises those who may be considering branching out on their own to chuck fear at the door.

“One of the common things I say is just start. I could’ve stayed at Apple longer, saved a little more money, done a little more research … it was starting the business that allowed me to see what I was supposed to do and pivot to facial recognition,” Brackeen said. “I would have never started a facial recognition company from the beginning. I had to start to even get this opportunity … Do it. Quit your job. Jump into it. You won’t starve. You’ll find a way and that hunger and that fear will drive you to success.”

Citing research that shows people test lower or higher than control groups based on whether they’ve been told they will pass or fail right before taking tests, Brackeen encouraged blacks and minorities, including women, to change their mindsets about branching out as entrepreneurs and seeking investors.

“We read all these articles that say African Americans can’t raise money and we go into these conversations prepared to fail,” Brackeen said. “We have to remove failure from our mindsets. Know that people who have you in the room wouldn’t waste their time unless they wanted to meet with or invest in you. They want to give you their money. Just allow them to do it.”

A South Florida transplant by way of Pennsylvania, Brackeen is an avid believer in giving back and paying it forward. It is something he learned from both his minister grandfather, upbringing and personal experience. This year he said he will start hosting a private dinner at his office for groups of people who have asked him to listen to their ideas.

“On a personal level, I got so much help along the way. So many people were willing to take meetings with me even though I was way too early and their only request was that I give back when it was my turn. I am certainly happy to do so,” Brackeen said.

Kairos aims to grow from its current 16 employees to 44 employees by the time the year is over as they are projected to process over one billion faces this year, up from 46,000 in 2015. They will be hiring for computer vision scientists and PHD’s as well as enterprise sales people with API experience.

Brackeen said he didn’t have to move to San Francisco to be successful in the tech world and other aspiring entrepreneurs can also bloom where they are planted.