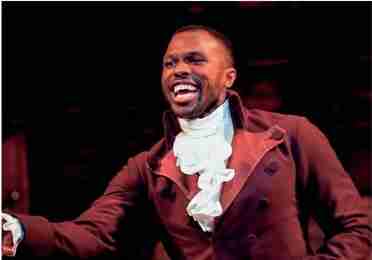 CORAL GABLES, Fla. – He has been nominated for three Tony Awards and appears in the first touring company of the hit play, Hamilton. Now Joshua Henry will receive the Frost Distinguished Alumnus Award at the Frost Music Live concert Broadway @ Frost on Oct. 15 at 8 p.m. at the UM Gusman Concert Hall, 1314 Miller Drive in Coral Gables.

Henry, who graduated in 2006, joins Broadway star Marcus Lovett, along with Dan Strange of the Frost faculty and Frost Musical Theater Workshop and Opera Theater Students for this special evening’s performance. He began his career in Godspell, and quickly moved on to a role in the ensemble and understudied the role of Benny, in an off-Broadway Tony Award-winning premiere run of In the Heights.

He followed up his Broadway debut starring as “Favorite Son” in the original Broadway cast of the Green Day musical American Idiot, and more recently starring as “Jake” in the Tony Award winning revival of The Gershwins’ Porgy and Bess. He also appeared as Jennifer Hudson’s boyfriend in the first Sex and the City movie. While attending the Frost School of Music at the University of Miami as a vocal performance major, he appeared in many musical theatre productions at the Jerry Herman Ring Theatre.

Marcus Lovett, a graduate of Carnegie Melon University, began his career in the original Broadway production of Les Misérables. He simultaneously appeared on ABC’s One Life to Live. His other Broadway credits include the lead roles in Aspects of Love, Phantom of the Opera, and King David. He has appeared in multiple off Broadway plays and musicals as well.

In 2012 he reprised his role as the Phantom, this time at Her Majesty’s theatre in the West End. Other than Michael Crawford, Lovett is the only person to play the Phantom in London and On Broadway. He is also the Voice of Good Morning America, and This Week with George Stephanopoulos, among others.

For more information or to purchase tickets visit www.frostmusiclive.com.