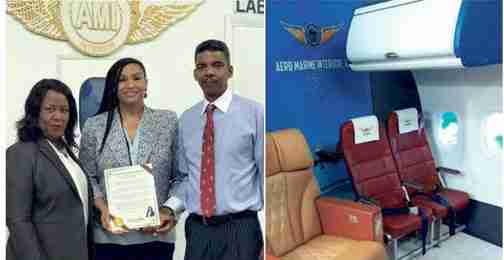 The Tuckers and their staff were acknowledged for their tremendous footprint in the business of repairing and overhauling aircraft and marine interiors.

“Small and minority owned businesses are a key aspect of our local and national economy. Businesses operating in North Dade contribute to the overall economic growth and livability in our community,” Watson said. “As a former small business owner, I commend Aero Marine Interior, Inc. and understand the level of commitment and fortitude necessary to execute your entrepreneurial goals.”

“We were clear about the financial risks and the sacrifices necessary in an effort to succeed and we were ready for it,” Jannette said.

Seventeen years ago, the Tuckers made a decision to work for themselves and have since established more than two successful businesses. Prior to the establishment of AMI, the Tuckers took on an 18-month venture specifically as a set-up tool to acquire funding to create an aviation company and the location would be between the City of Miami Gardens and North Miami Beach.

Jannette is a business graduate and previously worked for a large health insurance firm. Chris had trained and worked in aviation for more than 29 years. Together they saved and raised enough money to set-up a Repair Station certified by the FAA and opened up shop in Miami.

They waited eight months before securing their first contract with a major chartered airline repairing crew seats. They said momentum grew rapidly after that.

“The secret of our success is a clear demarcation of roles so we avoided stepping on each other’s toes and (had a) total dependence on our Christian faith,” Chris said.

AMI has employed more than 175 technicians over the past 17 years. Current employees are originally from 10 different countries speaking seven different languages, and have serviced aircraft from commercial fleets such as Delta, Air Canada, United and American Airlines just to name a few.

They repair, overhaul and refurbish commercial, corporate and privately owned aircrafts. AMI has also recently expanded their service line to include a Window Repair Shop and a Non-Destructive-Testing on aircraft, which has allowed the branching out into non-aviation industrial markets.

The Tuckers have fostered an environment and culture of family among their employees at their 14,000 sq. ft. facility. It is not uncommon to find technicians at work late on a Friday night taking the opportunity to bond with each other.

Although AMI stays below the radar, it still gives back to the community by offering a mentorship and apprentice youth program.

But the Tuckers named the privilege to refurbish two presidential candidates’ campaign aircrafts in two separate elections as well as those of several well-known celebrities among their proudest achievements.

The focus for AMI in 2017 is developing their newly expanded Non-DestructiveTesting services. The Tuckers are enthusiastic about the potential for ongoing growth in this crucial area.

“Safety has always been of major concern in this industry and we have the latest technology to ensure airlines put their passengers first,” Chris said.