US honors Puerto Ricans who fought, died in segregated unit 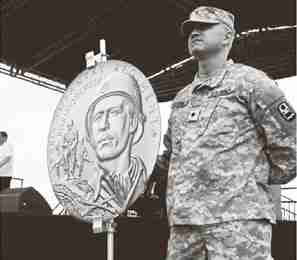 SAN JUAN, Puerto Rico – Angel Acevedo looked down at the Congressional Gold Medal in his hands as his eyes welled with tears during a ceremony held Wednesday to honor Puerto Ricans like him who faced discrimination and waited decades to be recognized for fighting several wars under the last segregated unit in combat.

The 94-year-old Purple recipient Heart then pointed at a group of fellow veterans gathered in front of him at an imposing 16thcentury fort from where the United States fired the first shots during World War I at a German ship leaving the U.S. territory. Acevedo praised the valor of his friends in the wars that fol- lowed.

“We were in combat 66 years ago and today history has arrived to recognize us,” said Acevedo, who fought in World War II, the Korean War and the Vietnam War as part of the 65th Infantry Regiment. “When I was wounded, those Borinqueneers saved my life.”

The Borinqueneers were a Hispanic unit segregated from other soldiers as were the black Tuskegee Airmen and Navajo Code Talkers. But it was not until this year that Acevedo and others like him received the highest civilian award given by Congress. “We are infinitely grateful to be recognized for what we went through and what we did,” said Acevedo, who spent eight months in a hospital in Hawaii after a mine exploded near his Jeep in Korea with such force that it threw him into a rice paddy.

Pedro Pierluisi, Puerto Rico’s representative in Congress, was among those who fought for the Borinqueneers to be recognized and said that because of their efforts Latinos have been able to integrate into the U.S. military. The Borinqueneers had once faced discrimination, such as being punished for speaking Spanish.

Robert McDonald, the U.S. Secretary of Veterans Affairs, traveled to the U.S. territory for the ceremony and praised the Borinqueneers. He lamented that many died before receiving the medal, including one who single-handedly stopped an enemy assault through the night after his group was attacked.

“Their service in both World Wars, and especially in Korea, is truly legendary,” he said. “This medal is long overdue.”

Echoing that sentiment was 88-year-old Rafael Gomez, who fought in Korea and said he observed how Puerto Rican soldiers often would be sent into the hardest missions.

“It is truly a late recognition because the majority of us have died,” he said.

One of the oldest living Borinqueneer soldiers honored on Wednesday was 104-year-old Martin Morales, who fought in World War II. He remained seated in his walker for the ceremony but later walked around the fort’s grounds to greet and chat with his friends.

Next post US official visits Haiti to evaluate progress toward elections