US official visits Haiti to evaluate progress toward elections 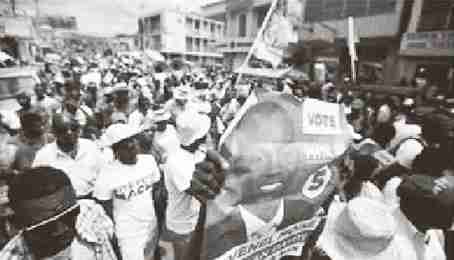 PORT-AU-PRINCE, Haiti – The U.S. State Department’s special coordinator for Haiti arrived in the troubled Caribbean nation Thursday seeking to help resolve a political standoff that has left elections in limbo.

Kenneth Merten began talks with Haitian officials and international partners focusing on steps needed to conclude a stalled electoral cycle that began last year. The U.S. was careful in its language, saying Merten was sent only to assess the situation, not wanting to appear to meddle in the country’s affairs.

While Merten held meetings, partisans of rival political factions threw rocks at each other in front of Parliament and riot police dispersed demonstrators with rubber bullets.

An early February accord negotiated by legislators and then-President Michel Martelly in his final hours as Haiti’s leader had set April 24 as the latest date for a runoff already postponed twice. But it quickly became apparent Haiti would miss that deadline, too, as a caretaker administration failed to ease deep divisions.

Now, a five-member verification is preparing to evaluate balloting that was contested last year due to fraud allegations. They were installed by the interim administration Thursday.

Interim President Jocelerme Privert, who was selected by lawmakers in February to lead a government that was supposed to hand over power to an elected leader May 14, has recently said Haiti cannot restart balloting without first restoring confidence in the electoral machinery.

Before his trip, Merten told The Associated Press that Haiti’s verification process needs to be as straightforward as possible. He said there is some U.S. concern that Haitian political actors whose factions didn’t do well in last year’s balloting could try to “manipulate the process” away from what voters authorized.

“We hope it is very, very quick and does not change the results of the election,” Merten said.

Washington will have to “look very carefully at what we do moving forward” if there appears to be any manipulation, he said.

International monitors who observed Haiti’s October presidential first round said official results putting government-backed candidate Jovenel Moise in the leading position for a two-candidate runoff appeared to be a genuine reflection of voters’ will. But the tally was derided as a sham by virtually all the other candidates, most notably the No. 2 finisher, Jude Celestin. He called results showing political newcomer Moise with nearly 33 percent of the Oct. 25 vote a “massive fraud.”

In recent weeks, a new Provisional Electoral Council was formed. It plans to publish an election calendar sometime next month.

Privert recently suggested the presidential runoff could be held in October to coincide with a vote for some Senate seats. Law- makers who are part of Moise’s Tet Kale faction accuse Privert of dragging out the process to hold onto power.

Next post A classless end to a classy night