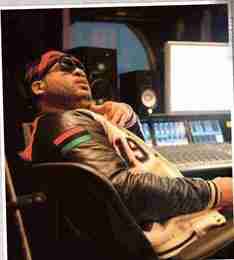 MIAMI – You’ve heard of Lamb, you probably just don’t know it yet. The multi-talented super-producer has been behind some of your favorite artists’ biggest hits for over a decade. Now he’s moving to the forefront as a rapper in his own right.

The more you learn about him, the more obvious it is that Lamb’s methods are unconventional – but so was the path he took to get where he is today.

Originally from Miami Gardens (then known as Carol City), Lamb caught the music bug early. The son of well-respected pastor Cecil Lamb, he began playing drums at four-years-old and started playing for his dad’s church at age five. While attending Miami Norland Senior High School, he learned how to make beats.

However, like many young men from Miami, Lamb was drawn to football and his skills landed him a full scholarship to FAMU (where he is in the Sports Hall of Fame) as well as a stint at the Dolphins’ training camp.

However after getting injured while in camp, Lamb began playing with the Arena Football League and turned back to focusing heavily on his first love – music.

“I was doing music and playing sports all my life … I was in a rap group in college (and) I wrote songs just because I liked it as a hobby. I felt like creating and I wasn’t even doing it to try and get on,” Lamb said in an exclusive interview with the South Florida Times. “We’d go out of town and play games … and I would take my beat machine on the sleeper buses … and my friends would come and grab my headphones and say, ‘Oh that’s hard; that’s crazy; that’s great;’ so I was like okay let me keep doing it.”

His ‘hobby’ led to him working with Miami rapper Brianna Perry and his beats caught the ear of Missy Elliott in 2003; leading him to work with the iconic artist as well as other notable singers like Beyonce, Keyshia Cole, Monica, Jazmine Sullivan, Fantasia, Ruben Studdard and more.

“Missy opened the door for the major opportunities allowing me to work with her. Before I worked for Missy, I was a fan of what Timb and her did for music coming out of the 90s and into the 2000s,” Lamb said. “I guess that lightbulb went off like, ‘Okay he has major ideas that we need to start using as opposed to letting him sit around just doing stuff for Brianna.’”

While his musical opportunities were expanding, Lamb was experiencing major adversity in his personal life including losing his mother and having financial problems – all while still pursuing a career in pro-football.

“I knew God told me I was gifted in football, but music kept calling – literally,” Lamb said. “I would get calls from Elektra Records … And then one day I get offered a publishing deal. And I didn’t know what a publishing deal was, but they told me how much money I could get at one time, in one check and I was like okay,” Lamb recalled. “I had never seen no money like that in one check. I was like, I only got one song on somebody album and y’all gon’ pay me six figures.”
That offer, combined with his father’s advice to start pursuing something other than football as a serious career, caused Lamb to put his energy into making music full-time.

“My Dad said, ‘You’ve given and you’ve worked so hard for football and now it’s time for football to pay you. If football hasn’t paid you yet, then maybe football isn’t for you,’” Lamb said. “Music wanted to pay me so I said let me go get this paper. I would have loved to play in the NFL. That was my dream, that was my passion, that was my goal, that was everything; but I was like maybe it’s not meant – and I was okay with it. … I left for LA and I just started working.”

Fast forward to last year when he was writing a hook for Missy’s single, “I’m Better.”

“When I first did it I assumed maybe she’d send it to Drake to do the hook and I was cool with that,” Lamb said. “But she said no, no, no, no, I like your voice Lamb. We’re going to keep you on it. Your voice sounds amazing. Get ready for the video.”

The song peaked at no. 28 on Billboard’s Hot R&B and Hip-Hop Songs and just like that Lamb went from producer to MC. While the move was unexpected – and initially not what he wanted – Lamb now welcomes the opportunity to flex his creative muscles in a different capacity.

“Back in ’05, Missy had talked to me for like three hours telling me I should be an artist because I could rap, I could sing, but I didn’t want to be an artist. I wanted to establish myself as a producer first,” Lamb said. “That transition of coming from behind the scenes, you know you have to turn up. Now it’s your turn. It’s on from there. You gotta be who you are.”
So the self-proclaimed visionary went from having Elliott’s ear to being heard by millions – and he makes it clear that Elliott’s belief in him is a gift he doesn’t take for granted.

“I try to go with the whole process and thank God I have Missy’s ear. It’s been a blessing to have a person like her who’s legendary kind of cosigning the whole idea of what I can do. That doesn’t always happen to people so I’m just grateful for that opportunity to step from behind the camera in front of the camera,” Lamb said.

This year Lamb has produced some big projects with his partner Bigg D through their production company 12th N Collins Entertainment including hit songs “If It Ain’t Me” by Trina featuring K. Michelle, Mary J. Blige’s “Find the Love” and “Got Me Crazy” by DJ E Feezy, Rick Ross, Fabulous and K. Michelle. He’s also still producing for Elliott and working on his own debut album, which he said will include old school and new school influences.

“I love what’s going on now. I love it with a passion. I love the new wave of artists. I don’t know if people care about bars and lyrics when they go to the party. I’m not mad at the kids for making the party songs,” Lamb said.

“At this point you’re doing art. You paint how you paint. I can’t tell these kids how to paint. I wouldn’t walk up to a (visual) artist and say, ‘You painted that red, can you change it to blue?’ You either like it or not, that’s how he painted that particular painting.”

“That’s how I look at songs now,” Lamb continued. “Today I might paint something totally different when I go to the studio. Let me paint. I’d rather do art than try to box myself into one particular thing and then that thing dies out and the industry feels like it’s saturated and they don’t want to rock with me no more. Something might inspire me from what the kids are doing. Who am I to say they’re not painting right?” When asked how he reconciles working in the secular music industry while being a pastor’s son, Lamb said he remains true to himself – because despite his strong Christian faith, he is a human being with varied experiences.

“Out of the abundance of the heart the mouth speaks, so whatever I say on a record that was on my heart at that time,” Lamb said.“I might not glorify what I did, but I might say what I did and it may not have been anything positive about it. When God is for you, nobody can be against you out here. At the end of the day, my personal relationship has nothing to do with anyone else’s. Wherever I go, I carry God’s light in my heart, no matter what. I am gonna paint and I’m gonna always carry God’s light with me and I’m gonna always tell people I’m a Christian.”
Lamb said he strives to relay not only his experiences, but those of others so people can be inspired by and learn from his music.

“I might rap about something I never did, but there’s a lesson in it. For example, I’ve never gotten high, but I can make a song that tells people they shouldn’t go to work high,” Lamb said. “I’m so excited about finally coming out as an artist and the day I hear my (own) song (on the radio), its gon’ be fun.”

His advice to people who are striving to overcome life’s obstacles to reach their dreams: “Work on being better than you were yesterday. That’s very important. To accomplish that you have to set realistic goals. Don’t spread yourself thin. Find that one thing and try to put 100 percent in it. That may be the thing that takes you over the hump. If it’s meant for you, it’s meant for you. Music called me,” Lamb said.