Will Amazon, Meek Foundation deliver the goods for Opa-locka? 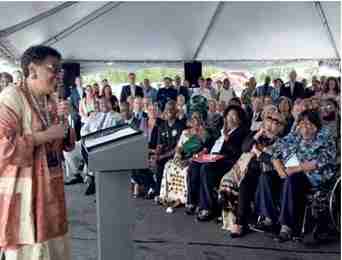 A. Gimenez, at the groundbreaking ceremony with retired Congresswoman Meek (in forefront). Addressing the gathering (right) is a key proponent of the project, Commissioner Barbara Jordan, whose district includes the city and the airport. PHOTOS COURTESY OF RYAN HOLLOWAY/MIAMI-DADE COUNTY

From its 1994 founding as an innovative online bookstore, his Amazon.com company’s purchases have ranged from $250 million for “The Washington Post” four years ago, to $13.7 billion for Whole Foods Market last month.

Amazon’s newest addition – which could help make it the first ever trillion-dollar company – is its 850,000-squarefoot distribution center, promising to employ more than 1,000, and planned for the Opa-locka Airport, in conjunction with the Carrie Meek Foundation.

The only thing left is for Amazon and the foundation to deliver.

During her career of service and other accomplishments, Meek was a Florida state representative and one of the first African-American Floridians elected to Congress since Reconstruction.

Now 91, the revered former congresswoman joined other officials and residents at the July 29 groundbreaking for her foundation’s tax-subsidized joint venture with Foundry Commercial and Clarion Partners, along with Amazon as the major tenant in its largest South Florida facility.

“To me it’s a renaissance for the area,” said Miami-Dade County Commissioner Barbara Jordan, a key proponent of the project, “because you really haven’t had any major development out here in a number of years.”

Her District 1 includes the city of Opa-locka – which is rebounding from corruption and mismanagement – as well as the general aviation airport partly in the city but owned and operated by the county.

“This type of project and the impact that it’s going to have, with over 1,000 jobs, full-time jobs with benefits, in addition to whatever part-time jobs will be created, is quite a stimulus for the area,” said Jordan.

“And when you have a company with a name like Amazon put a distribution center there, it says to the country, ‘Well if Amazon is there, we can go there too. We can come too and invest in the community.’ I feel that this is going to be the catalyst for big things to come.”

Others undoubtedly agree that the project was worth the wait since 2008, when Jordan sponsored the legislation to turn the vacant county property, whose Amazon development portion is in the city, over to the Meek Foundation.

“Right as we passed that item, to give control of the property, that’s when we had the downturn in the economy,” Jordan said of the time lag. “Even though the brunt of the downturn may have been felt in 2008, it really started in 2007. And it didn’t start recovering, really recovering, until after 2013. So you’re talking about six or seven years.”

Today, she said, “I don’t know anywhere is the country that you find an airport where you have a joint venture partner with the private sector – which is Foundry as the developer, and Clarion as the financial backers – and then you have Amazon as the major tenant, operating 91 acres of the 122-acre parcel, occupying over 800,000 square feet of space, and providing 1,000 jobs. And then to partner with a not-for-profit, that can then do the community based kind of activities that really target low-income individuals, as well as people who are in need of training, I don’t think you’ll find that kind of partnership anywhere else in the country.”

The outlook is not as rosy for some, however. County and foundation officials see patience and perseverance lined up to pay off for the community. Others are impatient for more communication, details and assurance that residents are aware of and prepared to take advantage of the opportunities.

“I see the potential of being a very positive and impactful opportunity,” said Opa-locka Community Redevelopment Agency Director Willie Logan, regarding the development due to debut next year. But in his view, the community thus far “has not been engaged, or had the opportunity to be engaged.”

Alluding to the robotic machines Amazon has planned for its mega-warehouse, Logan noted, “We started robotics camps about five years ago, and we have them in almost every school in District 1, in addition to our own campus. We are very much interested in working with folks who are blue-collar laborers, to retrain them to where they can begin to operate the machines that are doing jobs that heretofore they were doing.”

“I’m not just talking about the construction piece, but once they begin operating, what types of services, what type of folks are they going to need, in order to propel the business requirements of such a large plant. And that information really has not been forthcoming or been shared with us, or for that fact with the city of Opa-locka.

Other concerns with the project’s $5 million economic development subsidy, cited in a January Inspector General assessment and reported by “The Miami Herald,” include the reduction from a 2,300-job requirement, and a cutback from $37,000 to $28,000 in yearly wage, to cement the collaboration with the company nicknamed The Everything Store.

“So I think bringing Amazon bringing 1,000 jobs, bringing such a large construction project, potentially could be wonderful,” said Logan. “But the devil’s always in the details, and how that’s going to play out, and who’s going to have those opportunities and roles, etc., is what concerns us.”

Amid the interest and excitement, he said, “As a community there’s always lots of questions and some skepticism, because there’s always been promises made, and they aren’t always fulfilled, in terms of the residents who clearly the subsidy is being done to benefit. So, we shall see.”

The new possibilities getting under way may offer windows for more engagement.

For now, “I’m just so happy,” said Jordan, about the implications for South Florida, and for Meek’s legacy.

“I don’t know of any other foundation, black foundation, that would be sustainable like what has been set up now for the Meek Foundation,” Jordan added. “I was saying to the congresswoman yesterday, I said, ‘Congresswoman, you have something special here.

Not only do you have an international business park named after you, but you have a foundation that will live beyond you, me, your daughter, and everyone else, because it will keep giving back, to the community.’

“So it will be sustainable. Far beyond the next five years, the next 10 years, it will live on. I don’t know if we have such a thing in Miami-Dade County. I don’t think we have, basically a black foundation, named after an excellent congresswoman, who did so much for this community.”