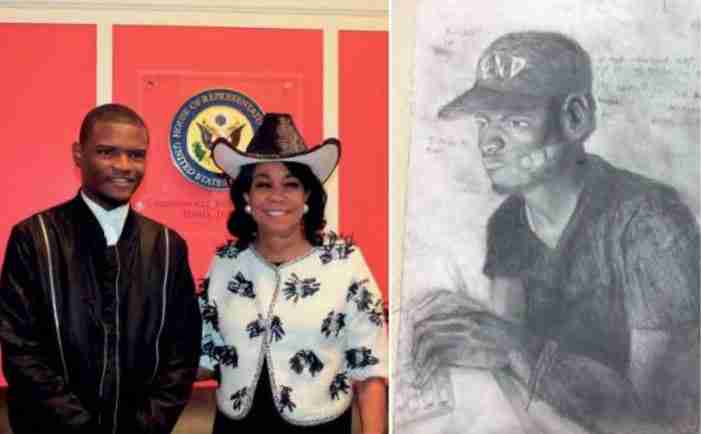 MIAMI – William Frazier, a 2017 graduate of Miami Northwestern Senior High School, has experienced a range of emotions – from shock and awe to pure delight – since learning that he is District 24’s 2017 Congressional Art Competition winner.

Frazier’s high school art teacher encouraged him to submit his graphite drawing, titled “I’m a Mess.” Although he’d already participated in several other contests, he was surprised to learn he’d been chosen over many other worthy competitors.

“I selected William’s work because it beautifully encapsulates a young black man’s catharsis,” said Congresswoman Frederica S. Wilson, who represents District 24. “I am very proud of him and look forward to seeing his creativity and career blossom.”

Inspired by his older sister, Frazier began drawing at age four and gradually began to take his craft more seriously.

“I started off wanting to be able to draw as well as she did, but she would tell me that I might one day be better,” he said, adding that the pair agree that he is the stronger artist.

As the competition winner, Frazier traveled to Washington, D.C, where he met Congresswoman Wilson and saw his work hanging in the U.S. Capitol. It was both his first airplane flight and first visit to the nation’s capital.

“It was awesome! There are so many important people who walk through there and now they will see my work,” said Frazier, who also got to view the historic paintings that adorn the rotunda under the Capitol dome and admire the building’s Neoclassical architectural style.

“My experience was so memorable and I’ll never forget it,” he said.

Since his June graduation, Frazier has focused on graphic design and pursuing his dream to become a fashion designer. Like any savvy millennial, he promotes his work on social media – a marketing strategy that has begun to garner him a robust fan base with nearly 2,000 followers on Instagram.

He creates logos for small businesses in Miami, New York and Trinidad and designs mixtape covers for music artists and rappers in California, including some who have worked alongside the awardwinning rapper Lil’ Wayne.

“Since launching my brand, some people in Germany have contacted me about how they can support me and others in London have asked to photograph my designs,” he said.

His future plans include a possible move to New York City, but for now Frazier is staying put in Miami, where he hopes to hold a solo art exhibition and produce a fashion show in the near future.

“There is always more that I can do,” Frazier said. “I haven’t reached my peak.”