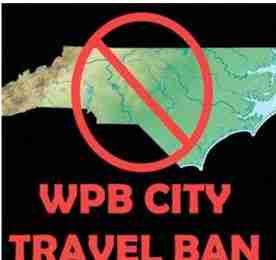 Mayor Jeri Muoio has become the first mayor in Florida to ban city-funded trips to North Carolina following that state’s enactment of HB2.

HB2, which was passed by the North Carolina General Assembly and signed into law by Gov. Pat McCrory last week, nullified all local ordinances in North Carolina which prohibit discrimination based on sexual orientation or gender identity.

“For more than two decades, West Palm Beach has been in the forefront, protecting the civil rights and ensuring equality for the LGBT community,” said Muoio. “Until North Carolina’s discriminatory law is amended or repealed, West Palm Beach taxpayers will not subsidize legally-sanctioned discrimination against LGBT people.”

The National Basketball Association’s 2017 All-Star Game is currently scheduled to be played in Charlotte; however the NBA issued a statement regarding the state’s new law.

“We are deeply concerned that this discriminatory law runs counter to our guiding principles of equality and mutual respect and do not yet know what impact it will have on our ability to successfully host the 2017 All-Star Game in Charlotte,” the NBA said in a statement.

Singer Bruce Springsteen recently canceled an upcoming concert in North Carolina due to the new law.

“North Carolina’s leaders have struck down local LGBT-inclusive discrimination ordinances and have prohibited the enactment of similar laws forever,” said retired judge Rand Hoch, President and Founder of the Human Rights Council. “We commend Mayor Muoio for putting her strong beliefs against bigotry into action by prohibiting taxpayer dollars being used in North Carolina.”