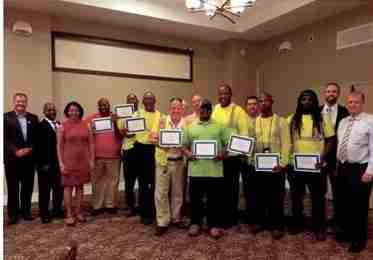 A group of WPB sanitation drivers were recently awarded for safely operating their vehicles.

PHOTO COURTESY OF THE CITY OF WEST PALM BEACH

A total of seven employees were recognized with certificates during a breakfast at the Mary V. McDonald Wilson Center at Gaines Park.

The awards ceremony follows the city’s implementation of a program designed to improve safety outcomes.

The Lytx camera captures crucial seconds of video inside and outside of the vehicle when triggered by an event like hard braking, sudden acceleration, swerving or other actions that might lead to a collision.

“By utilizing the data from this program, we can show our drivers how their driving has improved and also show the public what a great job our drivers are really doing,” said Pete Bieniek, Director of Public Works.

At the breakfast, Calvin Williams, Sanitation Supervisor, received an award for coaching excellence. He is among the supervisors using data to help improve driving outcomes. “Since the program was implemented, there haven’t been any major accidents … The guys are being very cautious about driving.”

Reports, including the U.S. Bureau of Labor Statistics Fatal Occupational Injuries Summary, show that refuse collection remains among the top most dangerous occupations.

By implementing the program, city leaders are taking a step toward making the job safer for sanitation employees.

Leon Pinder, Sanitation Superintendent, said safety is key for his team and the public.

“We use it for training opportunities with our drivers to help them be safer on the road. It’s almost like a second set of eyes on the road with our drivers. Now we can validate much of what they tell us thanks to this program,” Pinder said.

There are 40 City of West Palm Beach sanitation drivers who drive an estimated 40,800 miles annually on 166 routes. It’s estimated the drivers pick up 74,000 tons of trash and garbage and serve more than 102,000 customers each year.