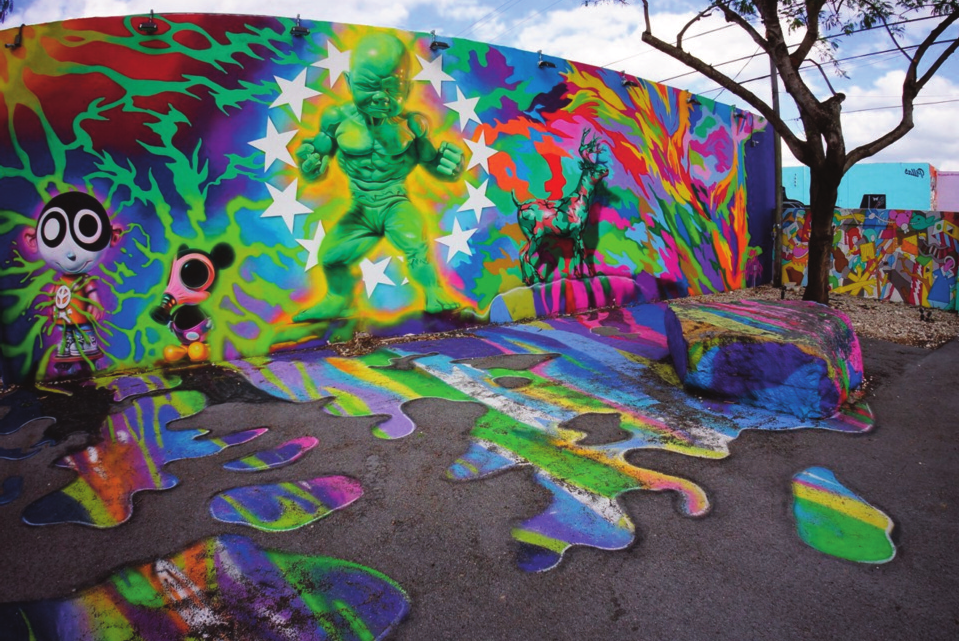 MIAMI – On any given day, a visitor to Miami’s Wynwood neighborhood might see a hipster pecking at a vintage typewriter outside a coffee shop or a young professional enjoying roasted duck carnitas at a fusion restaurant next door.

Two blocks away, a family from the Midwest, Latin America or Europe might be exploring the graffiti murals of the WynwoodWalls or wandering into an art gallery.At night, couples line up around the block to get into a trendy tavern.

The recent announcement that 21 people have been infected with the Zika virus by mosquitoes in the Wynwood area has scared away some visitors. Federal health officials last week warned pregnant women to avoid the neighborhood and a 1- square-mile area around it. But many remain undaunted.

“Everything here has a very modern vibe, a modern feel,” said Danny Perez,25,who sometimes comes toWynwood from South Miami to work. Pointing out a nearby organic juice and food place next to a letterpress store, he said, “These are niche markets that you don’t find everywhere in Miami.”

Just north of downtown Miami, Wynwood once was a garment and warehouse district but went into decline in the 1970s. Artists began setting up shop around the turn of the century,and galleries soon began opening in the decaying buildings and empty lots.Business owners started hosting an Art Walk one night a month, giving locals and curious tourists a chance to see and be seen.

The art created inside the buildings began spreading to the neighborhood’s exterior walls,and the annual Art Basel show that later came to Miami gave those works an international stage.

“I feel like I’m in Disneyland for the art world,”said Jonathan Yubi, 31, who came down to Miami from Orlando last week to pick up copies of his fledgling art publication Artborne Magazine from a printer. He used the trip as an excuse to check out Wynwood for the first time.

Courtney Clark,28, has been working at one of the area’s retail stores for about a year.She didn’t seem worried about Zika as she ate outside Thursday afternoon.

“I have a little bracelet with mosquito repellant on it,”Clark said.“But other than that,I’m not pregnant or looking to get pregnant anytime soon.”

While unafraid herself, she has noticed a drop in visitors.

“There are definitely fewer people around,” Clark said.“It will probably stay like that for the next couple weeks or so, until we get out of the news.”

Paul Villard, 23, said he thought about not showing up at the Wynwood restaurant where he works,but he ultimately decided to go. “You can’t really let that stuff interfere with life,” Villard said,acknowledging though that pregnant women should probably stay away for a while.

Until now,the only known Zika cases in the United States were in people who had recently traveled to Latin America and the Caribbean. Zika, a mild disease for most, can lead to severe brain-related birth defects if women are infected during pregnancy.

Health officials announced Aug. 1 that Zika had turned up in Wynwood. They clarified this week that the actual infections were limited to a 500-square-foot residential area north of the art district, and that area has since been bombarded with insecticides.

They have urged women of child-bearing years to avoid the area, and urged pregnant women there to be tested.

Health and dollars are both on the line as the Zika scare collides with Wynwood’s art and tourism boom.

Joel “Smiley” Atkinson, 47, said he’s seen many neighboring businesses move out over the five years he’s worked at LBK Shoes Corp. Property values have skyrocketed in the area, and many longtime residents and businesses can’t afford to stay.

“It’s a bad thing for some people, and it’s a good thing for other people,”Atkinson said. “For the art people, maybe it’s good. For the people doing business,that’s bad.”

Clark thinks the health news is unlikely to hurt Wynwood’s economic and cultural growth in the long run.

She’s certain the Zika fears will pass eventually,and the tourists will return.