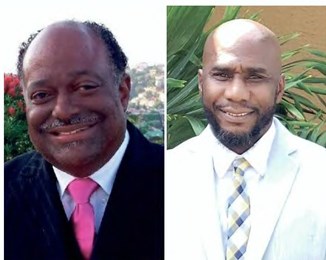 PHOTOS COURTESY OF CITY OF RIVIERA BEACH AND FACEBOOK

They want a new direction for this predominantly black, waterfront city. All incumbents who faced runoffs, lost their seats, signaling the people wanted change in a city that’s dogged by negative press and crime. Longtime mayor Bishop Thomas Masters’ run came to an end after 12 years and five terms as mayor.

He lost to political newcomer and also a pastor, Ronnie Felder in a massive upset. Felder got 58 percent of the vote, while Masters got 41 per cent, losing by some 850 votes. Felder says it was clear, the people wanted change. In addition to the residents, Felder credits his role as CEO of Jesus and You (J.A.Y.) Ministries and the church he pastors, Transformation Church, for supporting him with full force. He says he’s excited, humbled, and thankful—all at the same time. “I believe the community was tired of the negativity and I ran on being a bridge maker,” he said. “They want a change.

They believe I can come and embrace this community with our board and our business sector, that it’s not going to be divisive.

They heard me, they believed it. I’m excited about it. With the right council on board and the right mayor, I think we can move the city forward.””And so you see it paid off tonight, ” he said after the results were final.

Meanwhile, Masters, who served as mayor for an unprecedented five terms, says he got caught up in a sweep by the residents. “It was a sweep for change, and I got caught up in the sweep,” he said after conceding the election. Though it was a disappointing loss, Masters says he’s grateful to God for the opportunity to serve for such a long period of time. He believes he made a difference in the lives of the people of Riviera Beach, fighting for justice and a good name for a city that’s dogged a negative image. He was known for putting ex-felons to work with his incredible amount of job fairs for those with a criminal record.

But Masters wasn’t alone in the residents’ desire for change. Long term commissioner Lynne Hubbard, lost her run-off with accountant Tradrick McCoy by a wide margin in District 1. McCoy won 75 percent of the vote while Hubbard won 25 percent. Two years ago, the residents vowed to get rid of Hubbard after she voted to oust beloved then- city manager Jonathan Evans. To date all of those who ousted Evans have been voted off the council by voters, as they vowed they would.

Meanwhile, in District 3, incumbent Tonya Davis-Johnson, who was sometimes considered a voice of reason on the council, was also ousted Tuesday, demonstrating that the people wanted change all the way around. She lost to health planner Shirley Lanier. And in District 5, businessman Douglas Lawson, also a political newcomer, beat out former deputy Cory Blackwell. Only one current councilmember remains in office: KaShamba Miller Anderson, who was not up for re-election.

In West Palm Beach, prominent black attorney Richard Ryles’ race against Christy Fox was again too close to call. Ryles was up by just above one percent of the vote, which may call for a recount or another runoff.