McCray Barbecue headed back to the Super Bowl 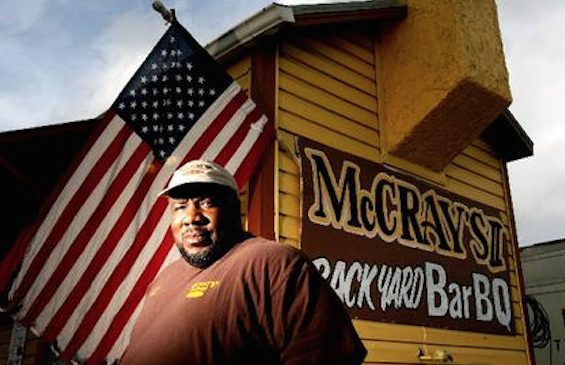 At the 2006 Super Bowl Tailgate Party in Miami, former NFL Executive Guy Troupe saw a line of people wrapped around the stadium.

He couldn’t imagine why there was a such a long line, but he had to find out. Upon further investigation, he discovered the long line was actually people waiting to get a taste of McCray’s Backyard BBQ! Word had spread how good the barbecue, brisket and other delights were, that hordes of celebrities, pro football players and executives had lined up at the special event to get a plate!

From that point on, a relationship was built between Troupe, who is the President and CEO of Troupe 21 & Associates, and Derrick

McCray, founder and CEO of McCray’s Backyard BBQ of West Palm Beach. Troupe, who has over 20 years experience working with the NCAA, NFL and NFL Alumni, was impressed with McCray, his food and his operation and a huge opportunity was born.

Now, some ten years later, Derrick McCray is still headed to the big game to cook for celebrities, players and NFL executives. This year, he’s headed to Santa Clara, California for Super Bowl 50 to prepare baby backs, lamb, brisket, smoked turkey and more for a special VIP Super Bowl after- party leading up to the big game.

Troupe said he’s thrilled that McCray is back to deliver his amazing delicatessens and his A-1 customer service. “Derrick is our exclusive vendor at a mixer at a VIP event Saturday night. ‘Pleased’ is not the proper word to describe how we feel! We are beyond thrilled to have him. We love his customer service and his food. He’s a big hit with our players and guests. We’re more than ecstatic,” said Troupe in a telephone interview on Monday. “Lots of (NFL players) are always trying to find out where he’s going to be positioned at our Player Networking Events.”

Derrick McCray said his ongoing relationship with Troupe and the NFL has been a huge blessing. McCray said it’s not only lucrative financially, but also an opportunity of a lifetime. “I get a bunch of advertising that you could never pay for. It keeps us out front and gives me a stamp of excellence. You really can’t put a dollar amount on all that you get when you’re on a world stage such as the Super Bowl,” said McCray. “It’s a blessing. I thank God we’ve developed this type of relationship with Troupe 21 and the NFL. I feel humbled. We’ve been a hit at all of the Super Bowl Tailgate parties and other events. We have an excellent working relationship. It’s like a quarterback and his wide receiver!”

Troupe said it’s not easy getting to do business with the NFL or sanctioned Super Bowl events. “It’s very difficult,” he said. “A small few actually get in. Derrick is one of the few.” And Troupe said this year’s Super Bowl is highly special because it’s the 50th Anniversary of the Super Bowl. “Without a doubt, Super Bowl 50, this year, is special. Tons of new events are taking place and many businesses are trying to capitalize on this one.”

McCray heads out to Southern California on Thursday and returns the following Tuesday. He’s taking a staff of five. He will do some of the cooking (for 500) here and ship it out to California and will do the rest at a special kitchen out there. It’ll be a lot of work, but he’ll get to play hard, too! He and a few others will get to go to the big game, and on Monday they’ll do some sightseeing before heading back home Tuesday.

McCray, who carried on the tradition of his father’s BBQ business, said he’s pleased his father lived to see him make it to a Super Bowl. His father, Herman McCray, Sr. said he was proud of his son. He passed away several years ago and his mother Lillian, passed away more recently. McCray said his goal was to make his parents proud. And he’s done so. “He could see himself in me,” he said of his father. “He got to see the McCray name throughout the country. I wanted him to know I did it for him and my mom.”

Troupe, for whom McCray has named a sausage –the Troupe Sausage—says this won’t be the last Super Bowl for McCray’s Backyard BBQ. “We’d like this relationship to last till the end of time!”

McCray said his local operation will still be open for business while he’s in California. Anyone wishing to try out his menu items for Super Bowl Sunday, can call his businesses at 561-842-1513 or 561-684-1113 or visit McCraysBBQ.com.