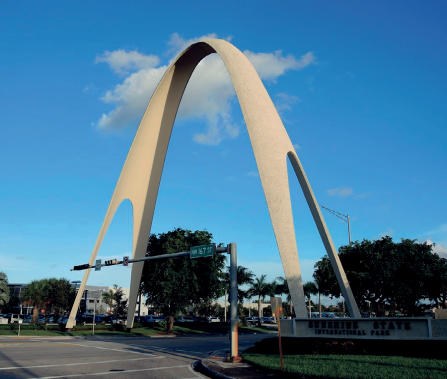 The area has no residential communities.

The land borders Miami Gardens by Northwest/Northeast 183rd Street on the north, Northeast Fifth Avenue on the east, I-95 on the south and Northwest First Avenue on the west.

Miami Gardens is the third largest city in Miami-Dade behind Miami and Hialeah, and has the largest black population in the county.

The County Commission approved Miami Gardens’ annexation application during a meeting on December 1. Vice Chair Oliver Gilbert III sponsored the ordinance to allow the city to expand its boundaries.

During an exclusive interview with the South Florida Times, Gilbert said the area was left out of the original city’s boundaries when Miami Gardens incorporated in 2003.

As mayor, Gilbert said he reached out to the businesses and they didn’t protest this time.

"The area should’ve been included when Miami Gardens ﬁrst incorporated in 2003," he said. "The businesses didn’t complain this time."

Gilbert said the annexation takes effect in less than 90 days.

The area generates $277,172 in additional tax revenues for Miami Gardens, according to the city’s application.

The county spends $361,208 a year to provide services to the vicinity.

It will cost Miami Gardens $1.4 million to service the area including providing infrastructure such as roads and drainage improvements projects, but some of the funding will come from the Citizens Independent Transportation Trust’s capital projects program.

The commercial and industrial area is home to Publix, National Industrial Park, CSX Transportation, and Life Technologies among other businesses.

Gilbert said annexing the area gives Miami Gardens the "great" ability to build continuity with the industrial and commercial areas.

Days after Till was killed, his body was pulled from the Tallahatchie River, where he had been tossed after he was shot, and weighted down with a cotton gin fan.

Two white men, Roy Bryant and his half-brother J.W. Milam, were tried on murder charges about a month after Till was killed, but an all-white Mississippi jury acquitted them. Months later, they confessed in a paid interview with Look magazine. Bryant was married to Donham in 1955.

The Justice Department in 2004 opened an investigation of Till’s killing after it received inquiries about whether charges could be brought against anyone still living. The department said the statute of limitations had run out on any potential federal crime, but the FBI worked with state investigators to determine if state charges could be brought. In February 2007, a Mississippi grand jury declined to indict anyone, and the Justice Depart-"Miami Gardens is not only a bedroom community but an industrial and commercial community as well," he said.

Miami Gardens will focus on repairing the roads and code enforcement, and providing landscaping in neglected areas.

The roads in some parts of the area are in bad condition, according to Miami Gardens’ annexation application.

Some areas have landscaping and others lack ornamental features.

Miami Gardens also wants to address the large illegal dumping site on the right of way near N.E. 4th Court and and N.E.183 Street.

Gilbert said the Miami Gardens Police Department will bring enhanced police protection in the area which was previously patrolled by Miami-Dade County police.

He said activities on the annexation land affected Miami Gardens that the city needed law enforcement to address the issues.

Attorney Chad Friedman, who represented Miami Gardens in their quest to annex the property, told county commissioners the city is capable of providing the infrastructure to the area and clean up the newest portion of the city. "The annexation area is extremely important to the city," he said.

In a prepared statement, Miami Gardens Mayor Rodney Harris said the city is excited to be growing and can’t wait to move forward with the newly acquired areas.

"The new area should have been part of the original incorporation of the city," he noted. The annexation is a positive step. It makes sense for us to be able to enhance and improve this newest part of the City of Miami Gardens." ment announced it was closing the case. Bryant and Milam were not brought to trial again, and they are now both dead. Donham has been living in Raleigh, North Carolina.

The FBI in 2006 began a cold case initiative to investigate racially motivated killings from decades earlier. A federal law named after Till allows a review of killings that had not been solved or prosecuted to the point of a conviction.

The Emmett Till Unsolved Civil Rights Crime Act requires the Justice Department to make an annual report to Congress. No report was ﬁled in 2020, but a report ﬁled in June of this year indicated that the department was still investigating the abduction and killing of Till.

The FBI investigation included a talk with Parker, who previously told the AP in an interview that he heard his cousin whistle at the woman in a store in Money, but that the teen did nothing to warrant being killed.