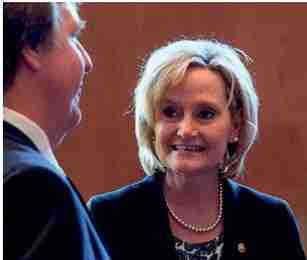 JACKSON, Miss. (AP) – A white Republican U.S. senator in Mississippi, a state with a notorious history for lynchings, says she will not answer questions about a video that shows her at a campaign event praising a cattle rancher by saying she would attend a”public hanging” if he invited her to one.

Sen. Cindy Hyde-Smith appeared with Gov. Phil Bryant on Monday at a news conference at the Mississippi Republican Party headquarters, where she accepted an endorsement from the National Right to Life Committee.

Reporters asked Hyde-Smith repeatedly about the hanging comment, which grabbed attention Sunday when the publisher of a liberal-leaning news site published it on social media.

“I put out a statement yesterday, and that’s all I’m going to say about it,” Hyde-Smith said.

In the brief video, shot Nov. 2 in Tupelo, Hyde-Smith says after a man introduces her to a small crowd:”If he invited me to a public hanging, I’d be on the front row.”

Hyde-Smith faces a black Democratic challenger, former congressman and former U.S. agriculture secretary Mike Espy, in a Nov. 27 runoff. She said Sunday that the remark was”an exaggerated expression of regard” for a friend who invited her to speak, and”any attempt to turn this into a negative connotation is ridiculous.”

Mississippi has a bitter history of racially motivated lynchings of black people. The NAACP website says that between 1882 and 1968, there were 4,743 lynchings in the United States, and nearly 73 percent of the victims were black. It says Mississippi had