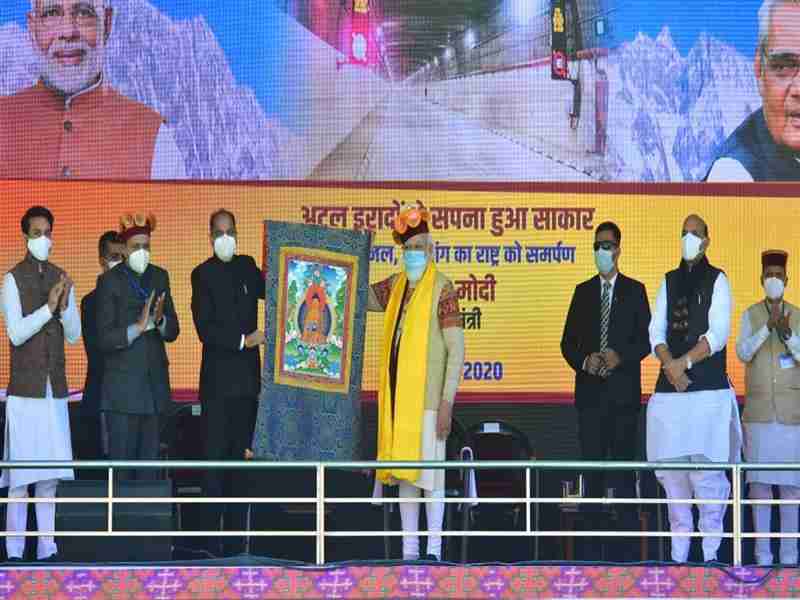 Indian prime minister Narendra Modi’s show of strength by inaugurating a highway tunnel, purportedly the highest in the world, has resulted in a fiasco, with the event itself turning into a super-spreader of the novel coronavirus and political controversy haunting the project.

Modi inaugurated the tunnel, named Atal Tunnel after former Indian prime minister Atal Bihari Vajpayee, on October 3. At an altitude of 3,000 meters (about 10,000 feet) above the sea level, the 9.02-km highway tunnel connects Manali and Lahaul-Spiti. The travel time between these two towns in the north Indian state of Himachal Pradesh will now be reduced by 4-5 hours.

Rohtang pass, under which the tunnel has been constructed, is among the highest in the world. Its name means “a pile of corpses” in Tibetan. The older road in the area used to be covered in snow for half the year, putting thousands of Indian soldiers in the region — strategically important as it is close to the disputed India-China border — at the mercy of the weather gods.

The tunnel is expected to turn things around.

Built at an expense of INR 3,200 crore ($437 million) by India’s Border Roads Organization, it will provide all-weather connectivity and also easy movement of armed forces.

Since May this year, India and China have engaged in several border skirmishes. On China’s side, there has been a build-up of civilian and military infrastructure. The new tunnel, which will allow the Indian army to bypass the Rohtang pass, was supposed to be a show of strength for the government.

But events around the inauguration and its aftermath did not follow the script.

“Over the past week, I was quarantined after I had come in contact with a Covid-19-infected person,” he tweeted. “Two days back, I started seeing some symptoms of the Covid-19 and got my tests done. The results are positive.”

The results came on Oct. 12. “I am under self-isolation at my residence,” said Thakur.

Members of Thakur’s Cabinet and other high-ranking officials in the state also went into quarantine. The state, too, has seen a surge in Covid-19 cases, with over 17,000 active ones as of Oct 13.

The plan was to have strict testing at the inauguration, but allegations have surfaced that the rules were flouted.

Surender Shourie, a member of the state’s Legislative Assembly and Modi’s Bharatiya Janata Party (BJP), tested positive a day before the event. He did not attend it but was in close proximity to the chief minister and other members of the government, who later met Modi.

Shourie in a social media statement said he had not hid his Covid-19 status, as had been alleged by some media houses, endangering the lives of the prime minister and other members of the Himachal Pradesh government.

“We had ensured proper distance and wore masks while meeting, so there is no chance of us getting infected,” said Rakesh Pathania, a Cabinet member.

But it was not only politicians who fear they have been infected. Security personnel, too, have tested positive.

Thirty-four of the 900 police personnel on the security detail during the inauguration at Lahaul have tested positive. Dr. Atul Fulzele, a senior police officer and principal of the Police Training College at Daroh, told Zenger News that 70 primary contacts of the infected persons had been traced.

“Our force was deployed at distant places and did not come in contact with the PM or any of the leaders,” he said. “They were deployed for traffic management at faraway places in Lahaul and Kullu.”

Another 35 police personnel from a battalion at Pandoh also tested positive after the event, though senior officers said they were not on duty during the PM’s tour.

Opposition leaders, however, claim that the government was lax in enforcing precautionary measures.

“We hope the police force of our state does not get infected,” said Congress leader Mukesh Agnihotri. “But the government should take such things seriously.”

“Politics should not be the motive of the ruling parties at this point of time, when there is a medical emergency across the globe,” he added.

The state government issued a clarification on Oct 7, claiming all protocols were followed.

“Covid-19 negative test results, not later than 48 hours, are required for everyone in a close proximity list,” it said. “The tests of these people in the proximity list were done properly…”

“It was only after their clearance that people, who were Covid-19 negative, were allowed in the function at all the venues,” it added.

Mismanagement of Covid-19 protocols is not the only problem with the tunnel’s inauguration — a political controversy has also erupted.

A plaque bearing the name of Sonia Gandhi, the president of Congress, has gone missing from the tunnel, provoking demands from the principal opposition party for it to be reinstated. The state committee of the party and its president Kuldeep Singh Rathore have threatened a state-wide agitation if the plaque is not reinstated, after it was found to be missing on Oct 13.

Modi was also at the receiving end of criticism when he took pot-shots at the Congress during the inauguration of the tunnel. He said the construction would have been completed only in 2040 if the Congress were still in power.

“Rather than hitting political goals at this moment, Modi should have given some statement about the border issue with China,” said Agnihotri.

Next post Zenger News Quiz: A Rock Legend Dies and an NFL Coach Gets the Boot