Providing a decidedly black alternative to Black Friday, the busiest shopping day of the year, the Roots Collective presented its first ever Black Friday Marketplace event at the Betty T. Ferguson Recreational Complex in Miami Gardens on Nov. 27.

The idea behind the initiative is to stem the flow of money exiting the black community and redirect it to black businesses. The event was so successful that it will now occur regularly.

“Initially, we just wanted to do that one day, but we got a great response, not only from the community but the vendors as well,” said Danny Agnew, one of the organizers. Agnew said he was encouraged by the mayor of Miami Gardens to present the marketplace more frequently.

“Mayor Oliver Gilbert pulled me aside and he urged me to do it every month,” Agnew shared. “What we came up with is every other month, we’ll have the marketplace at the Betty T. Ferguson Recreational complex and on the off months, we’re going to travel.”

To that end, the initiative will journey a few miles north to the African American Research Library and Cultural Center in Ft. Lauderdale on Jan. 16 for its second marketplace; returning to the Betty T. location in time for Black History Month in February.

“Events like this are important because they allow an economic expression of smaller cultural businesses that are representative of our community,” Mayor Gilbert shared in an emailed statement.

“The initial goal is to make sure we build a large network of black businesses and black business supporters so that we can start redirecting some of the resources to outlets in the black community,” Agnew stated.

“Not every item that’s bought and sold has to be bought and sold from a major retailer. We need to find better ways of circulating dollars in our community and I believe this to be an important mechanism,” said Gilbert.

Celebrating blackness is interwoven throughout the effort, with Agnew and the Roots Collective employing a very FUBU (For Us By Us)-inspired approach to the marketplace. Not only does the event spotlight black businesses, according to Agnew, “Each event is completely run and operated by people of color,” including the event’s security.

“At the event at Betty T… instead of the police there, we had the Fruit of Islam, which is the security wing for the Nation of Islam.”

Agnew added that Fruit of Islam’s presence will be a part of each marketplace, important, he said, because it helps “give people the idea of us being able to govern ourselves.”

The 26-year old Chicago native is optimistic about the future of the marketplace. Regarding the November event, he said, “People were invigorated, people supported the idea.”

And providing an indication that the group might be on to something, Agnew said, “A couple of vendors actually sold out of their products.” 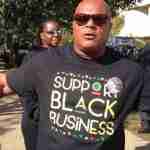