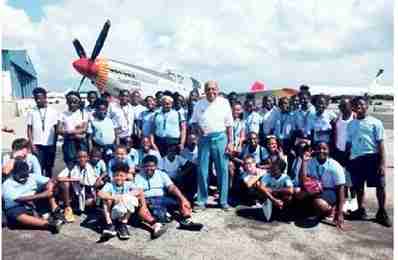 PHOTO COURTESY OF THE WORKERS CENTER

OPA-LOCKA, Fla. — Lieutenant Colonel Dr. Harold Brown, a 94-year-old former Tuskegee combat pilot, recently shared his unique experiences as a fighter pilot with middle and high school students from Miami-Dade County public schools. The students also witnessed flights of a fully restored World War II-era P-51C Mustang with the unique red tail paint scheme that was a hallmark of the Tuskegee Airmen and a screening of the film “Rise Above” in a mobile panoramic theater.

The event was presented by Carnival Corporation and organized by the South Florida Aerospace Scholarship Corporation (SFASC), which over its 25-year history has provided financial aid to more than 500 South Florida Air Force ROTC cadets.

The Tuskegee Airmen were the U.S. military’s first African-American pilots, navigators, bombardiers and support personnel, known for their extraordinary skill and courage during World War II. The success and dedication of the Tuskegee Airmen in the Civilian Pilot Training Program and U.S. Army Air Corps (predecessor to the Air Force) played a leading role in the desegregation of the U.S. Armed Forces in 1948.

“Rise Above” used the history, valor and achievements of the Tuskegee Airmen to motivate middle and high school-age children to consider careers in aviation, cybersecurity, robotics, drones, STEM subjects (science, technology, engineering and math) and more. In addition, the program stressed entrepreneurship, the arts and other self-development interests such as music, theater and dance.

Arnold Donald has served as Carnival’s CEO since July 2013. A strong believer that diversity of thinking drives innovation, Donald supports community engagement, diversity and inclusion, and has appointed numerous diverse and dynamic leaders from a wide variety of backgrounds into key leadership roles.

“The important objective of this initiative is to introduce America’s youth to the Tuskegee Airmen. As students learn about the courage, dedication and sacrifices the Tuskegee Airmen made for America, despite challenging circumstances, we hope that students and other visitors will be touched by the story and find it a source of inspiration for their own lives.”

“We are fortunate to have the support of Carnival Corporation as host and sponsor,” Stan Bodner, Retired Air Force Colonel and event organizer. “This will provide a special opportunity to positively impact and inspire the lives and future careers of young boys and girls from South Florida schools attending this exciting exhibit”

To learn more about the Red Tail Squadron’s “Rise Above” outreach program, visit its website https://www.redtail.org/rise-red-tail/. at

Next post The night Cassius hung with Sam, Jim and Malcolm in Miami