Music in the Park concert draws hundreds of attendees 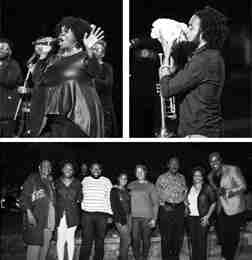 MIAMI GARDENS – More than 400 residents packed the Betty T. Ferguson Amphitheater for Music in the Park on Dec. 7 in Miami Gardens.

“We had such an amazing lineup,” Commissioner Jordan said. “I was thrilled to feature jazz, soul, and gospel music at this Music in the Park concert.”

Concertgoers grooved to the smooth tunes of Jean Caze Presents Amédé featuring the jazz trumpeter who showcased his conch shell trumpet skills. Caze paid tribute to his native country Haiti with an instrumental and improvisational performance.

For the second part of the show, Miss Gia Wyre showed off a wide repertoire, singing gospel, R&B, soul, and blues. The crowd sang along as she performed her rendition of “Yes Jesus Loves Me,” Ray Charles’ “Night and Day,” Luther Vandross’ “Never Too Much” and Jill Scott “He Loves Me.”

The next Music in the Park concert is scheduled for May 3.

Next post Fashion show still talk of the town