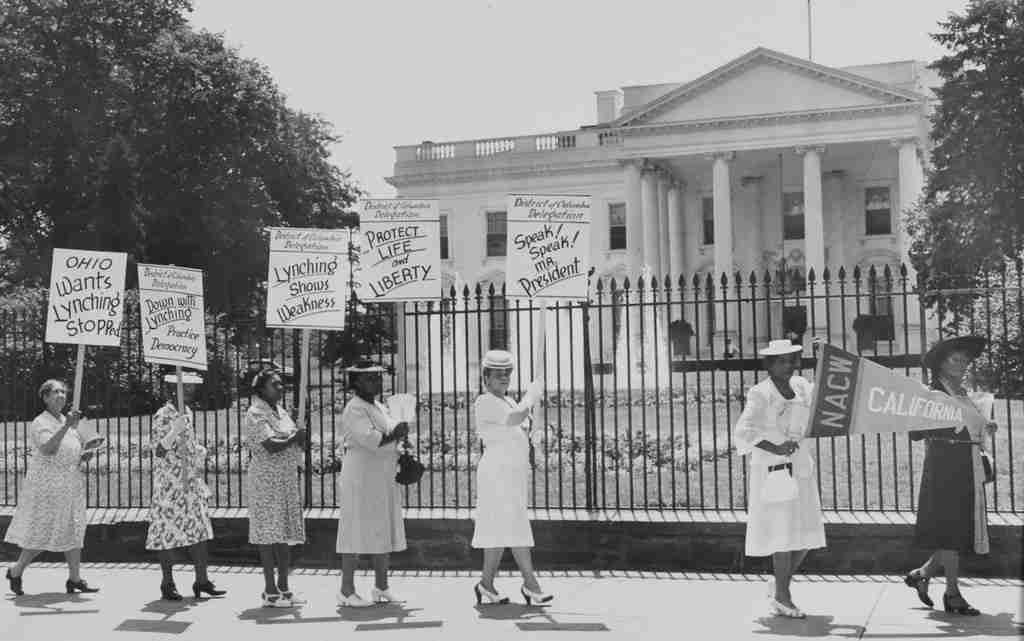 Black delegates from several states parade with signs in front of the White House to protest the mob slaying of four negroes.

ATLANTA (AP) – It was the summer of 1946 when two young black couples riding along a rural road were stopped by a white mob in Georgia at Moore’s Ford Bridge, overlooking the Apalachee River. The mob dragged the victims from the vehicle, led them to the riverbank and shot them multiple times.

The brazen lynching of the four sharecroppers horrified the country that year. President Harry Truman sent the FBI to the site in rural Walton County. Months of investigation yielded dozens of possible suspects. But a federal grand jury failed to indict anyone. The case was revisited several times decades later, and just last month Georgia’s top law enforcement agency closed its latest investigation not long after the FBI concluded its latest review, saying no one remained to prosecute because all the likely killers were dead.

Despite all that, activists and others who spent countless hours studying the slayings and trying to raise awareness still hope answers will surface.

A bridge that spans the Apalachee River. “We want to perfect the record for history’s sake, to make sure this case is never forgotten,” said Tyrone Brooks, a veteran civil rights activist who began looking into the lynching in 1968 at the request of the Rev. Martin Luther King Jr.

Even if no one is ultimately prosecuted for the deaths of Roger and Dorothy Malcom and George and Mae Murray Dorsey, it’s important to know what happened and who was involved, said Brooks, a former state lawmaker.

Particularly in recent decades, hopes of cracking the case have led civil rights activists, journalists, students, cold case groups and historians to the bridge and surrounding towns, about 50 miles (80 kilometers) east of Atlanta, seeking clues or trying to coax people into talking. But the community’s hesitancy to talk — out of fear or unwillingness — has persisted, much as it stymied investigators long ago.

Nonetheless, Brooks said the closure of the investigations won’t stop him. “Our resolve is as strong as it’s ever been,” he said.

And each July since 2005, he has helped organized a reenactment of the lynching to raise public awareness that the case remains unsolved.

It all began after Roger Malcom, 24, had been jailed after stabbing and injuring a white man, Barnett Hester, during an argument. Witnesses told authorities Malcom suspected Hester was sleeping with his wife.

Loy Harrison, a white farmer, paid $600 to bail Malcom out on July 25, 1946, and was driving Malcom, his wife and the other couple home when — he told investigators — he was ambushed by a mob.

Harrison, who was unharmed, told authorities he didn’t recognize anyone in the mob, which the FBI numbered at 20 to 25 people. An FBI report noted Harrison was a former Ku Klux Klansman and wellknown bootlegger. The initial investigation lasted roughly six months and yielded dozens of possible suspects, some simply because they were Hester’s relatives, friends or neighbors, or because they had no alibis. Ultimately, there were no indictments.

Law enforcement revisited the case in the 1990s after people came forward promising new information, though investigators said they still couldn’t prosecute anyone. In June 2000, then-Gov. Roy Barnes ordered the Georgia Bureau of Investigation to reopen the case. That investigation closed in January and the bureau made public its redacted case file, including interviews, leads followed, case summaries and press clippings.

Laura Wexler, who wrote on the killings in “Fire in a Canebrake: The Last Mass Lynching in America,” said she experienced the community’s reluctance to talk when she began researching her book in 1997. When people did talk, she said, she heard different versions of the circumstances surrounding the lynching, often split along racial lines.

“Unfortunately, when these histories divide, what you get is a hole in the center where the truth should be,” she said. “To me, the closure of the case with nobody held accountable is not surprising. I think it’s a demonstration of the power of race to distort even the best intentions to get at the truth.”

Vivian James was a Kennesaw State University anthropology student when she participated in an excavation about seven years ago. The sleuthing uncovered dozens of bullets and casings and yielded a preliminary ballistics analysis.

She said she understands law enforcement can’t continue committing resources to investigations if they feel there’s no possibility of bringing someone to trial. But the case is still important, she said, both for personal closure for some and — more broadly — to ensure such atrocities never happen again.

Janis McDonald, co-director of the Cold Case Justice Initiative at Syracuse University College of Law, said some of her students worked on the case in 2015. She said that at least with the investigative files now publicly released, a fresh set of eyes might find something new.

She said it was vital to keep studying this and other big cold cases.

“The reason this is so important is that we’re still facing all this racial conflict, and acknowledgement is the only real key to healing,” McDonald said. “You’ve got to acknowledge that the wound is there, and that hasn’t happened here.”

Next post US inequality persists 50 years after landmark Kerner Report