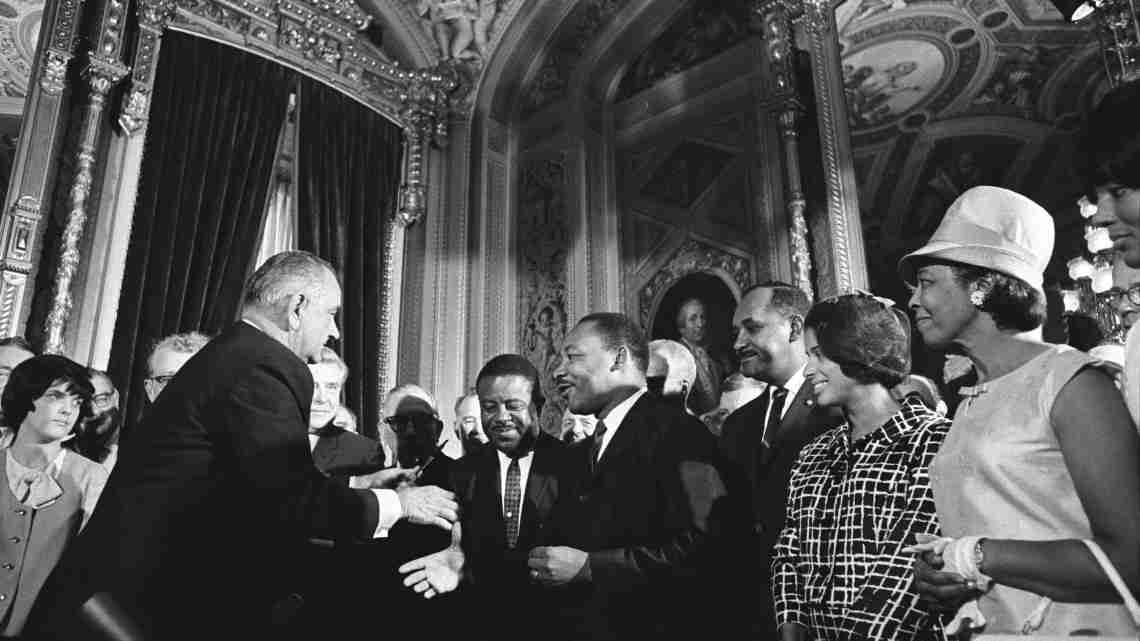 Washington, D.C — The Voting Rights Act, signed into law by President Lyndon Johnson (1908-73) on August 6, 1965, aimed to overcome legal barriers at the state and local levels that prevented African Americans from exercising their right to vote under the 15th Amendment (1870) to the Constitution of the United States. The act significantly widened the franchise and is considered among the most far-reaching pieces of civil rights legislation in U.S. history.

Lyndon Johnson assumed the presidency in November 1963 upon the assassination of President John F. Kennedy. In the presidential race of 1964, Johnson was officially elected in a landslide victory and used this mandate to push for legislation he believed would improve the American way of life, such as stronger voting-rights laws.

In 1965, at the time of the passage of the Voting Rights Act, there were six African-American members of the U.S. House of Representatives and no blacks in the U.S. Senate. By 1971, there were 13 members of the House and one black member of the Senate.

After the U.S. Civil War (1861-65), the 15th Amendment, ratified in 1870, prohibited states from denying a male citizen the right to vote based on “race, color or previous condition of servitude.” Nevertheless, in the ensuing decades, various discriminatory practices were used to prevent African Americans, particularly those in the South, from exercising their right to vote.

During the civil rights movement of the 1950s and 1960s, voting rights activists in the South were subjected to various forms of mistreatment and violence. One event that outraged many Americans occurred on March 7, 1965, when peaceful participants in a voting rights march from Selma, Alabama, to the state capital in Montgomery were met by Alabama state troopers who attacked them with nightsticks, tear gas and whips after they refused to turn back. Some protesters were severely beaten, and others ran for their lives. The incident was captured on national television.

In the wake of the brutal incident, Johnson called for comprehensive voting rights legislation. In a speech to a joint session of Congress on March 15, 1965, the president outlined the devious ways in which election officials denied African-American citizens the vote. Blacks attempting to vote often were told by election officials that they had gotten the date, time or polling place wrong, that they possessed insufficient literacy skills or that they had filled out an application incorrectly. Blacks, whose population suffered a high rate of illiteracy due to centuries of oppression and poverty, often would be forced to take literacy tests, which they inevitably failed. Johnson also told Congress that voting officials, primarily in Southern states, had been known to force black voters to “recite the entire Constitution or explain the most complex provisions of state laws,” a task most white voters would have been hard-pressed to accomplish. In some cases, even blacks with college degrees were turned away from the polls.

The voting rights bill was passed in the U.S. Senate by a 77-19 vote on May 26, 1965. After debating the bill for more than a month, the U.S. House of Representatives passed the bill by a vote of 333-85 on July 9. Johnson signed the Voting Rights Act into law on August 6, with Martin Luther King Jr. and other civil rights leaders present at the ceremony.

Although the Voting Rights Act passed, state and local enforcement of the law was weak and it often was ignored outright, mainly in the South and in areas where the proportion of blacks in the population was high and their vote threatened the political status quo. Still, the Voting Rights Act gave African-American voters the legal means to challenge voting restrictions and vastly improved voter turnout. In Mississippi alone, voter turnout among blacks increased from 6 percent in 1964 to 59 percent in 1969.

Since its passage, the Voting Rights Act has been amended to include such features as the protection of voting rights for non-English speaking American citizens.