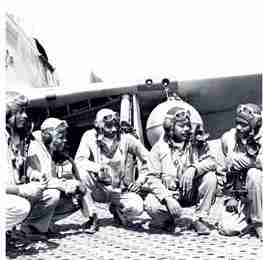 The Tuskegee Airmen flew missions in Europe during WWII. Airman Capt. Lawrence Dickson, with the 332nd Fighter Group of the 100th Fighter Squadron crashed on Dec. 23, 1944.

By FAIMON A. ROBERTS III

But that’s exactly what University of New Orleans archaeologist D. Ryan Gray is hoping to do this summer when he leads a team of students and others to southern Austria, to investigate a site where they believe one of the famed Tuskegee Airmen went down near the end of World War II.

The site, close to the Italian border and the Austrian town of Villach, is near the last reported sighting of Capt. Lawrence Dickson, a pilot with the 332nd Fighter Group of the 100th Fighter Squadron. Just after midday Dec. 23, 1944, Dickson was flying a reconnaissance mission in his P-51D when he radioed his wingman, 2nd Lt. Robert Martin, that he was having problems and was going to have to eject.

Martin told authorities that he saw Dickson’s canopy jettison but never saw Dickson’s parachute, though possibly because it blended with the snow covering the ground. Since then, Dickson has been classified as missing.

Dickson and Martin were both black pilots in World War II, when the U.S. armed forces were still segregated. The 332nd Fighter Group was made up of black pilots who had trained at the Tuskegee Institute in Alabama and became known as the Tuskegee Airmen.

Officials with the Defense POW/MIA Accounting Agency, whose mission is to account for all missing U.S. service members, won’t confirm that the crash site

Gray will be investigating is suspected to be Dickson’s. But a review of documents, as well as accounts from locals who said they witnessed the crash, has led some experts to believe the site is worth exploring.

Gray said he is excited about the challenge of excavating an aircraft from World War II, something he’s never done before. And there is the added bonus of perhaps being able to bring a war hero home.

“We are hoping to resolve this case this summer,” he said of a five-week dig season.

Unlike typical archaeological excavations, which are painstakingly meticulous and intentionally slow in order to be comprehensive, this one has a different objective: to confirm the type of plane that crashed there and then identify any human remains that may be found. If that is accomplished, then the POW/MIA agency will begin the process of preparing a proper recovery.

Gray and the 13 UNO students will have ample help in their efforts. They will be joined by two students from the University of Innsbruck, in Austria, as well as academic staff there who have a special interest in World War II and aircraft archaeology.

They also will get help from Tom Czekanski, a senior curator at the National World War II Museum in New Orleans who is an expert on P- 51s, the plane Dickson flew. Czekanski said he plans to look for the P-51’s notable characteristics: a Packard-built Merlin engine, a type of propeller known as a Hamilton Standard or the type of wheels and struts that formed the landing gear.

“Those are all distinctive for the P-51,” he said.

And though Czekanski is excited about maybe finding the plane, he is even more hopeful that the team can bring some closure to the 70-year-old case.

“I think the most rewarding part will be if we can find the remains of an individual who’s been lost and be able to bring him home,” he said. “That’s the meaningful point of this.”