At least 300 dead in Sierra Leone mudslides and flooding 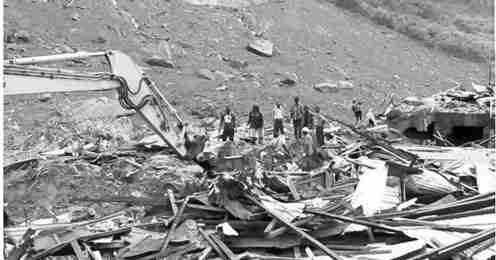 At least 300 dead in Sierra Leone mudslides and flooding.

FREETOWN, Sierra Leone – Mudslides and torrential flooding killed more than 300 people in and around Sierra Leone’s capital early Monday following heavy rains, with many victims trapped in homes buried under tons of mud.

Survivors and volunteers dug through the mud and debris at times with their bare hands in a desperate search for missing relatives, and military personnel were deployed to help with the rescue operation in the West African nation.

Sierra Leone’s national broadcaster announced late Monday that the death toll had risen above 300. Initial Red Cross estimates said as many as 3,000 people were left homeless by the disaster and that figure was expected to rise. Communications and electricity also were affected.

The mortuary at Connaught Hospital was overwhelmed by the number of dead, and bodies had to be spread out on the floor, coroner’s technician Sinneh Kamara said.

The toll did not include the untold numbers buried alive in their homes as they slept. More bodies also were expected to be found as floodwaters receded.

In an interview with the Sierra Leone National Broadcasting Corp., Kamara urged the health department to deploy more ambulances to bolster the four belonging to the hospital.

The broadcaster interrupted regular programming to show scenes of people trying to retrieve the bodies of relatives, and some were shown carrying the dead to the morgue in rice sacks.

The president’s office released a statement encouraging people to relocate to safer parts of Freetown and sign up at registration centers. The office made no mention of the death toll.

“The government is fully seized of the situation and in collaboration with our development partners, is undertaking a coordinated response to provide emergency services to our affected compatriots,” it said.

One particularly hard-hit area was the suburb of Regent, located east of Freetown.

“The mudslide swept down from the hills on the outskirts of Freetown early this morning and spared nothing in its path,” said Sasha Ekanayake, the Sierra Leone director for the charity Save the Children. “Houses are buried and entire families are missing, including children.”

Homes were destroyed by the flooding, while others were inundated by the floods, leaving many without shelter, Ekanayake said, adding that some children have been separated from their families.

“In places, entire communities seem to have been washed away and whatever is left is covered in mud,” said Abdul Nasir, program coordinator for the International Federation of Red Cross and Red Crescent Societies.

He said Red Cross volunteers have been digging with their bare hands and whatever tools available to search for survivors.

“They are also caring for and helping family members who are desperately waiting for news of their loved ones,” Nasir said.

Many of the impoverished areas of Sierra Leone’s capital are close to sea level and have poor drainage systems, exacerbating flooding during the rainy season.

Deforestation for firewood and charcoal is one of the leading factors of worsening flooding and mudslides. Freetown’s drainage channels also are often clogged because of garbage dumping due to insufficient sanitation services in many areas.

Next post The KKK attacked her family; Now she's writing to a Neo-Nazi