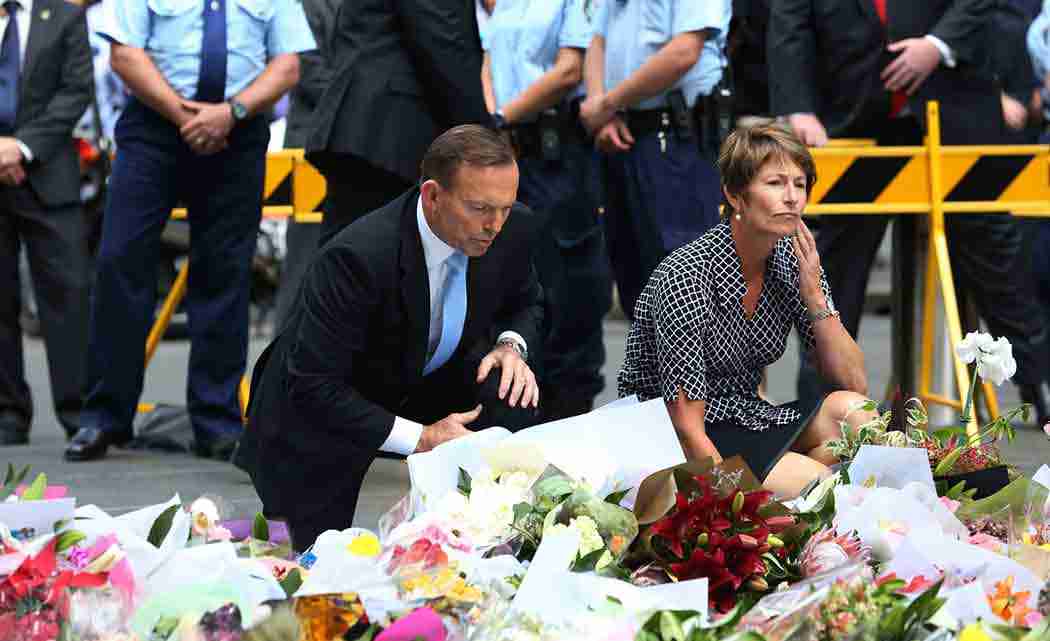 SYDNEY — Tearful Australians laid mounds of flowers at the site where two of 17 hostages were killed Tuesday when police swooped into a cafe to rescue them from a gunman — an Iranian-born self-styled cleric described by the prime minister as a deeply disturbed person carrying out a “sick fantasy.”

The 16-hour siege that ended in a barrage of gunfire early Tuesday left the gunman, 50-year-old Man Haron Monis, dead, and a nation that has long prided itself on its peace rocked to its core.

At a news conference later in the day, Prime Minister Tony Abbott called the siege Australia’s first brush with terrorism in more than 35 years and addressed the most glaring question that has emerged from the crisis: How did Monis — a man with a lengthy criminal record — slip through the cracks?

“How can someone who has had such a long and checkered history not be on the appropriate watch list? And how can someone like that be entirely at large in the community?” Abbott asked. “These are questions we need to look at carefully and calmly and methodically. That’s what we’ll be doing in the days and weeks ahead.”

After a day of intense drama, many questions remained: Why was the gunman, who had a sordid criminal history, out on bail? Why was he not on a terror watch list? How did he get a shotgun in a country with tough gun ownership laws?

The siege heightened fears of a terror attack, but it also produced heart-rending displays of solidarity among Australians who reached out to their Muslim compatriots. Many Australians offered on Twitter to accompany people dressed in Muslim clothes who were afraid of a backlash against the country’s Muslim minority of 500,000 in a nation of 24 million. The hashtag #IllRideWithYou — or I’ll Ride With You — was used more than 90,000 times by early Tuesday.

But the most visible reaction the day after the siege came in the form of mountains of flowers blanketing the pavement at Martin Place, where the siege began during Monday morning’s rush hour. The gunman burst into the Lindt Chocolat Cafe, took 17 people inside hostage and forced some to hold a flag with an Islamic declaration of faith above the shop window’s festive inscription of “Merry Christmas.”

“I’ll never forget this day as long as I live,” said Jenny Borovina, who was in tears with two friends while carrying white flowers to the site. She predicted that the effect of the standoff would leave a permanent scar on Australia’s psyche. “Our laid-back nature has just changed,” she said.

Like so many who work in the area, Borovina said she was locked down in her office near the cafe for more than four hours Monday before police gave her the all-clear to leave. During that time, she said, she called her son to say take care. She also called her aunt, asking her to look after her son if she didn’t make it out alive.

“Australia was a really safe place before,” said Andrea Wang, who laid a bouquet of lilies at the site, near her office.

“I hope our country gets through this very quickly,” she said, adding that her family from China had been calling. “They worry about me in this country.”

Abbott joined the outpouring of national mourning and laid a bouquet at Martin Place, a plaza in Sydney’s financial and shopping district. He called the spontaneous shrine “an expression of the innate goodness and decency which is a mark of Australian character.”

Australian Muslim groups condemned the hostage-taking in a joint statement and said the inscription of the Islamic flag was a “testimony of faith that has been misappropriated by misguided individuals.”

Abbott sought to portray Monis as a deluded and mentally troubled person rather than a religious fanatic.

He called the victims “decent, innocent people who got caught up in the sick fantasy of a deeply disturbed individual.” He said the siege showed Australia is not immune to the violence that has hit other countries, but he doubted that Monis’ actions would inspire copycats.

“There was nothing consistent about this individual except that he was consistently weird,” Abbott said. “I don’t think anyone would want to emulate that.”

Monis was convicted and sentenced last year to 300 hours of community service for sending what a judge called “grossly offensive” letters to families of soldiers killed in Afghanistan between 2007 and 2009.

He later was charged with being an accessory to the murder of his ex-wife. Earlier this year, he was charged with the sexual assault of a woman in 2002. He had been out on bail on the charges.

Police were investigating whether he was the registered owner of the shotgun that he used in the siege.

The standoff started around 9:45 a.m. Monday and stretched into the early hours of Tuesday morning. Heavily armed police finally stormed the cafe at around 2 a.m. when they heard gunfire inside, said New South Wales state police Commissioner Andrew Scipione.

“They made the call because they believed that at that time, if they didn’t enter, there would have been many more lives lost,” Scipione said.

A loud bang rang out, several hostages ran from the building, and police swooped in amid heavy gunfire, shouts and flashes.

Authorities have not said whether the two dead hostages — a 34-year-old man and a 38-year-old woman — were caught in crossfire, or shot by their captor.

One of the victims was Katrina Dawson, a Sydney lawyer and mother of three children.

“Katrina was one of our best and brightest barristers who will be greatly missed by her colleagues and friends,” Jane Needham, president of the New South Wales Bar Association, said in a statement.

The other victim was the manager of the cafe, Tori Johnson.

Four people were injured, including three women who were hospitalized in stable condition after being treated for gunshot wounds, and a police officer released from the hospital after being treated for shotgun pellet wounds, said Deputy Police Commissioner Catherine Burn. Two other hostages, both pregnant women, were assessed by doctors and were in stable condition, police said.

In the hours after the bloodshed, many struggled to come to terms with the incongruous nature of the attack, which took place at a cheerful cafe as people filed in for their morning coffees.

“It’s shocking that it has happened to people like us that are just going out for a coffee,” said Michael Gardiner, a visitor from the western city of Perth, who recalled sitting in the cafe about a year ago. “But it’s beautiful to see everyone coming here. There’s a real sense of community.”

Next post Robin Williams' suicide seizes the year on Google