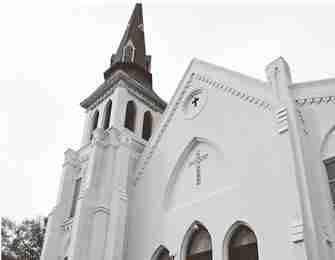 Nine people were left dead after a deranged shooter opened fire in a historic African-American church in Charleston, South Carolina on June 17, 2015.

The event comes during the vitriolic and sometimes violent presidential campaign season that has seen blacks and whites face off at rallies for Republican Donald Trump. Just 150 miles away, a white Trump supporter was captured last week on video punching a black protester who was being escorted from a North Carolina rally.

Both Democrats and Republicans are part of the civil rights tour, including GOP South Carolina Sens. Tim Scott and Lindsey Graham, a one-time candidate for president.

Organizers hope the Pilgrimage to South Carolina that starts Friday will be an exercise in forgiveness and strength in a state whose reaction to last summer’s violence at Emanuel AME Church has been held out by some as a model of how to handle racially charged situations.

After the June 17 slayings – in which the suspect is a white man who had expressed support for white supremacy and the Confederate flag – relatives of the nine people killed expressed forgiveness for Dylann Roof, with some saying they would pray for him. Gov. Nikki Haley has frequently expressed pride at how the state didn’t devolve into riots, like other places have experienced after shootings in the past two years, but instead came together in peace and support.

The Faith and Politics Institute has held such bipartisan events in five southern states since 1998.

Taking a break from partisan politics in the contentious presidential election year, the group is visiting churches in the Columbia area as well as the site of the Orangeburg Massacre where three students were killed during a protest of a segregated bowling alley in 1968. They will also discuss the effect of the Charleston church shootings and worship at Emanuel AME on Sunday.

Next post America's third Revolution is currently being televised