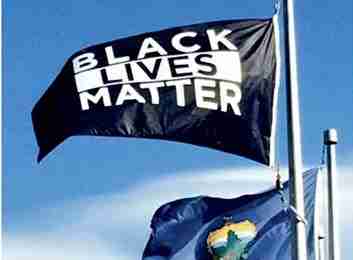 Black Lives Matter Flag flies at student center at the University of Vermont.

The student-led flag raising is part of a series of Black History Month events at the Montpelier High School, where 18 of the 350 students are black.

Some of those students took turns raising the flag Thursday morning in a ceremony attended by hundreds of students, staff and community members.

“I think black lives matter in all realms. And really the education system is where it starts,” said Joelyn Mensah, a senior who co-founded the student group Racial Justice Alliance.

Several police officers were at the event because of protest threats mostly from out of state, said Montpelier Police Chief Anthony Facos. There were no protesters at the ceremony.

While the decision has sparked some backlash, officials said the school has received an outpouring of support from the community.

“We are proud to do this because it honors the reality that the experience of our … black students is not the same as the experience of our white students,” Superintendent Brian Ricca said. “And our goal has been to have a substantive conversation about this, not only in our building but in our community.”

The national Black Lives Matter movement grew out of a white police officer’s fatal shooting in 2014 of a black unarmed man in Ferguson, Missouri.

A similar flag that flew at the University of Vermont in the fall of 2016 was stolen.