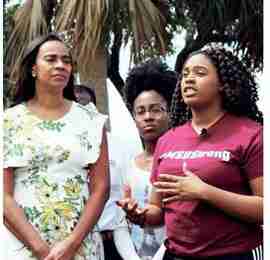 PARKLAND, Fla. – With many across the nation still grappling with the aftermath of the deadly Feb. 14 mass shooting at Marjory Stoneman Douglas High School in Parkland, Fla., some black students are speaking out to make sure their voices don’t get lost in today’s ongoing debate surrounding gun violence and equality.

Last week, black students from Stoneman Douglas held a press conference at North Community Park, less than a mile south of where 17 people were tragically killed and several others were severely wounded.

The event, which was supported by the group Black Lives Matter Alliance of Broward, gave students the chance to speak openly with local residents and members of the media to express their concerns about being underrepresented and overlooked in past and present gun violence movements – something that many have said happens far too often within communities of color.

asked Stoneman Douglas student Mei-Ling Ho-Shing. “I was on the second floor of the freshman building when the shooting incident occurred, and something as simple as a lock saved my life. At other schools, they are broken, their gates are busted in, and you can jump in and out of their facility as you please. That’s a problem.”

Here locally, black students who spoke at the press conference also highlighted the fact that the movement needed to focus on additional issues that have plagued the nation for some time, including the need for mental health screenings, equal resources and proper training for the law enforcement officers.

“It’s estimated that one in three police officers suffer from untreated post-traumatic at Stoneman stress disorder,” said 17-year old Kai Koerber, a student Douglas. “When mentally ill police officers are invited to safeguard a traumatized student body, it becomes a recipe for disaster.

Those chosen to work at schools should receive PTSD counseling and special diversity training.”

According to the Gun Violence Archive (GVA)– a nonprofit formed in 2013 that provides free online public access to accurate information about gun-related violence in the United States – there have been more than 20 mass shootings since the event in Parkland, including in cities like Detroit, South Bend, Ind., Camden, N.J., and Memphis, Tenn.

From Jan. 1 to April 2, 2018, there were nearly 14,000 gun-related incidents across the country, resulting in more than 3,570 deaths and approximately 6,252 injured. Additional data from GVA also shows that there were 644 victims between the ages of 12 to 17 who were either killed or injured from use of a firearm.

“We’re all tired of our children being shot, and we’re tired of losing loved ones. We have to do something about regulating guns and taking assault weapons off of the streets,” said Dr.

Rosalind Osgood Ph. D,, a member of the Broward County School Board.” Our children are our future, and it’s time for us to come together as a community around this cause to save our lives.”

Next post Rights Icon Winnie MadikizelaMandela: A life of struggle