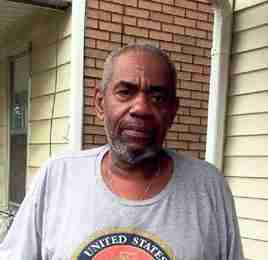 Kevin Fantroy, 62, stands on his porch in Hamtramck, Mich.

HAMTRAMCK, Mich. – Black victims of discrimination had to wait decades for a Detroit enclave to replace homes that were demolished in the 1950s and `60s in the name of urban renewal.

Now, only a few years after many finally got keys to their new homes, dozens of Hamtramck residents are back in federal court challenging property tax bills that they can’t afford.

“Astronomical,” said Mary Miner, whose taxes rose 63 percent to $2,600 on her twostory house on Goodson Street. “This is how I’m treated?”

Miner, 67, and others are worried they’ll be priced out of homes that were built or rehabbed as a legal cure for the destruction of Hamtramck’s black neighborhoods. They’re zeroing in on key words that helped resolve a 1968 lawsuit: affordable housing. A judge has responded by suspending tax bills and ordering negotiations.

It’s another twist in a 49-year-old case that doesn’t seem to end.

“Plaintiffs now face losing their homes and being displaced a second time,” attorney Michael Barnhart said. “This is unconscionable.”

Lawyers for Hamtramck, a 2-square-mile industrial city of 20,000 that is surrounded by Detroit, said it’s “dangerously false” to claim the city is targeting blacks with higher tax bills.

“We want them to stay and be part of the community,” Mayor Karen Majewski said. “This was just part of a broader strategy to make sure we had accurate information about the value of our properties.”

For generations, Hamtramck was mostly known as a hub of Polish culture. A statue of St. John Paul II was erected to celebrate his visits here as a cardinal and pope. But the city now is more diverse: flags of the world fly along Joseph Campau Street; the city council is majority Muslim; many business signs are in Arabic. The Census Bureau estimates more than 40 percent of residents were born outside the U.S.

Hamtramck was a much different city when the case first went to court. Blacks said white city leaders were destroying their neighborhoods by knocking down houses in the name of urban renewal or allowing the route of Interstate 75 to cut them off from the rest of the community. In 1971, U.S. District Judge Damon Keith said “the total effect was removal of black citizens.”

But it took another decade for Hamtramck to agree to offer 200 housing units as well as housing for senior citizens. Construction still didn’t start for many more years, due to political opposition and poor city finances. The process was so slow that many victims of the discrimination have benefited only in the past seven years. The mayor believes a few houses still need to be built.

Now, nearly a half-century after the lawsuit was filed, the latest quarrel centers on property taxes. Hamtramck said it decided to update the values of 150 properties, including dozens of homes that were part of the lawsuit settlement, after neglect by past assessors. That step led to higher tax bills.

Barnhart predicts a wave of foreclosures if Hamtramck doesn’t reverse course. He said the remedy for past discrimination was to bring people back to Hamtramck, many of them low income, and low taxes are an “essential element” of affordable housing.

At a recent court hearing, city attorney Travis Mihelick promised Hamtramck would be flexible to try to solve the dispute. U.S. Magistrate Judge Elizabeth Stafford halted tax collections at 68 houses and ordered both sides to talk over the summer.

“This is something that hangs over our heads in terms of community relations and moral authority,” said Majewski, the mayor, referring to the many turns in the long-running discrimination case. “It’s very important that we do the right thing. … There has just been one obstacle after another.”