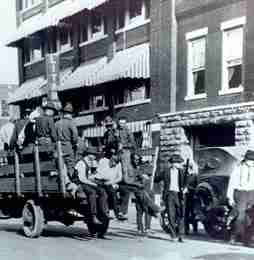 Blacks being taken to the Brady Theater during the 1921 Tulsa Race Riot.

TULSA, Okla. – Only time will tell if there will be another section of town in the USA like the neighborhood of Greenwood in Tulsa, Oklahoma. Thus far, as history would have it, there has yet to be a town to duplicate it. As one of the most prominent concentrations of African-American businesses in the United States during the early 20th century, it was popularly known as America’s “Black Wall Street” until the infamous Tulsa race riot of 1921, in which white residents massacred hundreds of black residents and razed the neighborhood within hours. The riot was one of the most devastating massacres in the history of U.S. race relations, taking with it the distinction of a town with more black businesses than ever before or since.

But the poignant question is “how” did this happen? There are two considerations to muse over: How did Greenwood become so prosperous, and how, on a fateful day in 1921, did it all go up in smoke?

It seems it started with a migration of blacks to the area just after the turn of the 20th century. According to history, many black Americans moved to Oklahoma in the years before and after 1907, which is the year Oklahoma became a state. Oklahoma represented change and provided a chance for black Americans to get away from slavery and the harsh racism of their previous homes. Most of them traveled from other states, since Oklahoma offered hope and provided all people with a chance to start fresh. They traveled to Oklahoma by wagons, horses, trains, and some even dared to travel by foot. They had just that much faith in Oklahoma!

Many of the black Americans who traveled to Oklahoma had ancestors who could be traced back to Oklahoma. Many of the settlers were relatives of black Americans who had traveled on foot with the Five Civilized Tribes along the Trail of Tears. Others were the descendants of people who had fled to Indian Territory. Many Black residents were also from the various Muskogee speaking peoples, such as Creeks, Seminoles, and the Yuchi, while some had been adopted by the tribe after the Emancipation Proclamation. They were thus able to live freely in the Oklahoma Territory.

When Tulsa became a booming and rather well noted town in the United States, many people considered Tulsa to be two separate cities rather than one city of united communities. The white residents of Tulsa referred to the area north of the Frisco railroad tracks as “Little Africa.” This community later acquired the name Greenwood and by 1921 it was home to about 10,000 black residents, and that’s how the neighborhood got its start.

Greenwood was centered on a street known as Greenwood Avenue. This street was important because it ran north for over a mile from the Frisco Railroad yards, and it was one of the few streets that did not cross through both black and white neighborhoods. Even today, in the 21st century, many cities have a “dividing line,” thus dividing the black section of town from the predominantly white section of town. The citizens of Greenwood took pride in this fact because it was something they had all to themselves and did not have to share with the white community of Tulsa. Greenwood Avenue was home to the black American commercial district with many red brick buildings.
These buildings belonged to black Americans and they were thriving businesses, including grocery stores, banks, libraries, a newspaper and much more. Greenwood was one of the most affluent communities and it became known as “Black Wall Street.”

In next week’s story – part two of this series, on the anniversary of that tragic day, we’ll look closely at the Tulsa race riots – how they happened and why. We’ll learn how a town that was the apple of everyone’s eye – became leveled to the ground, and within a matter of hours, was gone.
Stay tuned for our exclusive special on the downfall of Black Wall Street, next Thursday, June 1, an exclusive of South Florida Times.

Next post LeBron undaunted by challenge of facing Warriors in Finals