Black Wall Street: The cause of the riot 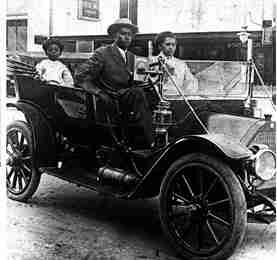 Greenwood has persevered through disasters and economic downturns to revitalize itself multiple times, impacting the larger Tulsa community, and creating a remarkable history.

TULSA, Okla. – Memorial Day weekend is supposed to be about fun in the sun, cookouts and showing support for those who have given the ultimate sacrifice for our country. All about the red, white and blue.

But back in 1921, Memorial Day weekend was anything but fun, and it was certainly not about the best in this country. In fact, it was the weekend of the deadliest race riot in the history of this country.

The Tulsa race riots occurred on May 31 and June 1, 1921 and will go down in history as the deadliest of riots in the U.S. Our country’s most prominent black community – Greenwood in Tulsa, Oklahoma, was leveled to the ground when a mob of angry whites took matters into their own hands and burned Greenwood to the ground. Up in smoke went the town, its storied businesses, and a legacy of a town known as “Black Wall Street” for it’s numerous prominent black businesses. In a matter of hours on those two fateful days, Greenwood, and its place in history as the wealthiest black town in the nation, was gone.

Why did Greenwood, which was the model city for black towns in the world, suffer such a horrendous fate? Why did it inspire such ire that naysayers would bring it to ruins? There are theories out there, and among them was jealousy. It is said that whites were envious of the town which boasted its own libraries, banks, grocery stores and countless other thriving businesses. And for that reason, they banded together and vowed to bring it to destruction, which they did.

But there’s also the theory that a young black boy raped a white elevator operator and after he was reportedly going to be lynched, blacks descended upon city hall and a confrontation ensued where shots were fired and some blacks and whites were killed.

But as for the alleged rape, according to Greenwood Cultural History, sometime around or after 4 p.m. on May 30, Memorial Day, 19-year-old Dick Rowland, a black shoe shiner employed at a Main Street shine parlor, entered the only elevator of the nearby Drexel Building, at 319 South Main Street, to use the top-floor restroom, which was restricted to blacks. He encountered Sarah Page, the 17-year-old white elevator operator who was on duty.

The two likely knew each other at least by sight, as this building was the only one nearby with a washroom that Rowland had express permission to use, and the elevator operated by Page was the only one in the building. A clerk at Renberg’s, a clothing store located on the first floor of the Drexel, heard what sounded like a woman’s scream and saw a young black man rushing from the building. The clerk went to the elevator and found Page in what he said was a distraught state. Thinking she had been assaulted, (raped) he summoned the authorities.

According to the Greenwood Cultural History account, the 2000 official commission report notes that it was unusual for both Rowland and Page to be working downtown on Memorial Day, when most stores and businesses were closed. It suggests that Rowland had a simple accident, such as tripping and steadying himself against the girl, or perhaps they were lovers and had a quarrel.

It’s unclear of whether DickRowland and Sarah Page knew each other or to what extent. It seems reasonable that they would have at least been able to recognize each other on sight, as Rowland would have regularly ridden in Page’s elevator on his way to and from the restroom. Others, however, have speculated that the pair might have been lovers – a dangerous and potentially deadly taboo, but not an impossibility…

Whether they knew each other or not, it is clear that both Dick Rowland and Sarah Page were downtown on Monday, May 30, 1921 – although this, too, is cloaked in some mystery. On Memorial Day, most – but not all – stores and businesses in Tulsa were closed. Yet, both Rowland and Page were apparently working that day…

What happened next is anyone’s guess. Yet, in the days and years that followed, everyone who knew Dick Rowland agreed on one thing: that he would never have been capable of rape.

But as this news spread throughout the city, mob violence erupted. Thousands of whites rampaged through the black community that night and the next day, killing men and women, and burning and looting stores and homes. About 10,000 blacks were left homeless, and property damage amounted to more than $1.5 million in real estate and $750,000 in personal property ($30 million by 2017 standards, it is estimated).

Some blacks claimed that policemen had joined the mob; others said that National Guardsmen fired a machine gun into the black community and a plane dropped sticks of dynamite. Those accounts may in fact be true, because in an eyewitness account discovered in 2015, Greenwood attorney Buck Colbert Franklin described watching a dozen or more private planes drop burning balls of turpentine on Greenwood’s rooftops, supporting reports that the attack was carried out on the ground and by air.

It destroyed more than 35 blocks of the town, with more than 800 people admitted to hospitals. It is said that more than 6,000 black residents were arrested and detained, many for several days. The Oklahoma Bureau of Vital Statistics officially recorded 39 dead, but the American Red Cross estimated 300, a number much more widely touted and supported by historians.