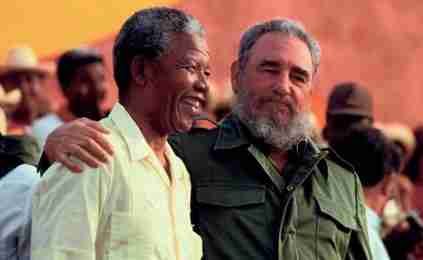 DETROIT – The Fidel Castro that Sam Riddle and many other African-Americans admired was not the revolutionary dictator who plunged Cuba into economic ruin and held the island nation in an iron grip.

To them, he was a freedom fighter who cared about improving the lives of all Cubans, regardless of race.

Castro, who died Friday at age 90, sought out black leaders. He met with Malcolm X in 1960 in Harlem, New York’s most celebrated black neighborhood. He also had a close relationship with South Africa’s Nelson Mandela.

“It was Fidel who fought for the human rights for black Cubans,” said Riddle, political director of the Michigan Chapter of the National Action Network. “Many Cubans are as black as any black who worked the fields of Mississippi or lived in Harlem. He believed in medical care and education for his people.”

The dictator’s efforts to achieve racial equality mean he “will never be a monster” to his many admirers, Riddle added. “To me, he’s the essence of humanity.”

Castro led a rebel army to victory in 1959 over the country’s pro-U.S. Batista government. Many Cuban elites fled 90 miles north to Miami, where they spent decades in exile. After his death, many Cuban Americans in the United States celebrated.

Some of those who fled to Miami “had looted Cuba … and exploited the poor and the working class,” said Riddle, 70, who also teaches media at a Detroit community college. “Now those are the same individuals who have twisted the story to demonize Fidel Castro in death.”

Under President Barack Obama, diplomatic relations with Cuba are being re- opened. President-elect Donald Trump has criticized the Obama administration’s stance on Cuba and threatened Monday to “terminate” the U.S. detente with the Cuban government.

After the revolution, Castro declared an end to segregation. However, the number of Afro-Cubans at the top of the country’s political and economic ladder is small. They make up a disproportionate number of the urban and rural poor.

Castro’s actions “would appeal more to anybody of color,” said Lynn Reasonover, a black financial executive in Chicago who visited Cuba in August as part of a vacation cruise. “I’m not so sure if white America would appreciate what he’s done.”

Reasonover, 54, walked through parts of Havana and two other cities, speaking with Cubans. What she saw resembled parts of the United States. There were areas where progress was evident and some parts of the island where poverty stood out.

“I understand what he was trying to achieve,” she said of Castro. “He had a deep love for his people. He had a great ideal, but I don’t think one size fits all, though.”

In comments made six years ago, Cuba’s foreign minister said the first communist Cuban delegation to the United Nations received support from Malcolm X and other black leaders and forged a lasting bond between “Cuban revolutionaries and the African-American progressive people.”

Castro also granted asylum to Joanne Chesimard, who was convicted in 1977 in the death of state Trooper Werner Foerster during a 1973 gunfight on the New Jersey Turnpike. Chesimard was sentenced to life in prison but escaped and made her way to Cuba, where she has been living under the name Assata Shakur.

“He was a hero in Africa, Latin America and North America for those who needed freedom from oligarchic and autocratic oppression,” the Rev. Jesse Jackson said last weekend in a statement.

“While Castro unfortunately denied many political freedoms, he at the same time did establish many economic freedoms — education and health care” Jackson said. “He changed the world. While we may not agree with all of Castro’s actions, we can accept his lesson that where there is oppression there must be resistance.”

Previous post US economy grew at 3.2 percent in 3Q