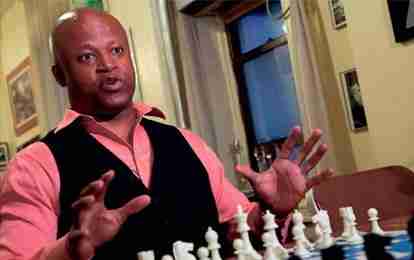 NEW YORK – Maurice Ashley was 14 when he saw a high school friend playing chess and challenged him to a match. He lost badly, but it sparked a love affair that started him playing nearly non-stop ever since.

There were the countless hours competing against the hustlers in city parks, and the serious players at chess clubs in Manhattan. There were the years spent against increasingly tougher competition in college, and ultimately against the best of the best at tournaments around the country and abroad.

All that playing has led the 50-year-old Ashley to some trailblazing accomplishments – the first African-American to be designated as a chess grandmaster, and last Wednesday, the first African-American to be inducted into the U.S. Chess Hall of Fame in St. Louis. He received his honor as the U.S. Chess Championship got underway, with Ashley taking on commentating duties.

When he got the call in January that he was being inducted, for his contributions as a player, coach and commentator, Ashley said tears came to his eyes.

Born in Jamaica, Ashley came to the tough Brownsville section of Brooklyn with two siblings when he was 12, reuniting with the mother who had left her children a decade earlier to carve out a better life, working as a nanny and later in a string of office clerk jobs. Ashley got serious about chess during his high school years and continued at New York’s City College. From the start, he had one goal.

“I was transported to this world and I wanted to be one of the grandmasters and that’s all I knew,” he said.

The process of becoming a grandmaster is done under the auspices of the World Chess Federation, known by its French acronym FIDE, and involves earning overall points and performing particularly well in chess tournaments.

At the time Ashley be- came a grandmaster, in 1999, he said there were about 500 or so players with the title. Currently, there are just over 1,500 grandmasters. They come from all over the world, but Ashley is still the only black American to reach that status.

Ashley, who makes a living from the game as a player, coach and author, says he wants to see more African-American players reach the highest levels. “It takes a lot of ground seeding to get players on that path,” he said.

Some of that seeding involves the work Ashley does with school children, including at an after-school program in Ferguson, Missouri. “Ashley is a great inspiration to younger black players, and to younger players of any race, that they could be a grandmaster too someday,” said Frank Brady, past president of the Marshall Chess Club in New York, one of the oldest clubs in the country. Overall, Ashley said his experiences in the chess world have been good, with only a few moments in which his race became an issue.

He recalled one incident when he was playing at a club and an older player came by and asked his opponent why he was letting Ashley beat him, using a slur to describe him. “It hurt. I was angry,” Ashley recalled. “Then he and I played eventually, two tournament games, and I beat him both times.” That’s what makes chess great, he said.

“Your moves do the talking.”