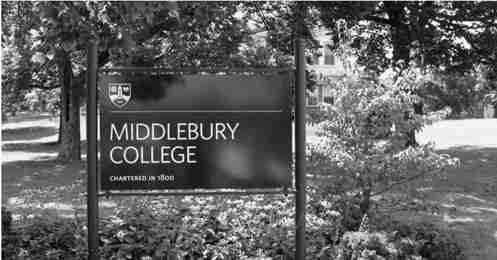 MIDDLEBURY, Vt. – As she readied to leave for her first day of college in Vermont, Ariana Rios’ father teared up and reminded her that she carried not only her hopes but those of their entire family.

The emotional scene transpired because Rios is the first in her family to attend college. When the 18-year-old freshman arrived at Middlebury College, the prospect of achieving that milestone suddenly hit her.

“When I saw it, it was like, `Oh my gosh, college,”’ said Rios, of her first sight of the campus where she’s to spend the next four years. “It’s like, it’s real, it’s hitting me, especially since I’m the first one, so there’s not a lot of help that my family can give me. All they can do is support and say, `We believe in you.'”

Rios is among a growing number of first generation college students. The Post-secondary National Policy Institute reports that 34 percent of undergraduates are the first in their families to attend college. Many of them face a range of academic, financial and social barriers that studies have found result in lower graduation rates compared to their peers whose parents got a college education.

Notre Dame College’s Joyce A. Banjac, who runs an organization connecting first-generation students to colleges and universities, said the experience for these young people is not that different from a tourist arriving in a new country without a guidebook or a map and unable to speak the language.

“It’s unlike any environment they have ever known so they don’t even know what to ask.”

As a result, an increasing number of colleges and universities are putting resources into helping these students. Some, like Notre Dame College, have opened special centers catering to first-generation students. The University of California system kicked off a program last month to help first-generation students on all 10 of its campuses, where an estimated 45 percent of incoming students are first generation.

Dartmouth College in New Hampshire offers a range of resources for first-generation students, including summer research opportunities, academic support throughout the year as well as a first-generation network that puts on special events and offers access to professionals who can share their experiences.

At Middlebury, about 50 first-generation students this year will attend First(at)Midd program,where they are paired with mentors and offered special programs to help them succeed. These incoming students get tips on how to study and manage their time and make sure students know about such things as the availability of internships and the best way to interact with professors.

“Being first-generation college comes in so many different shapes and sizes. It means inner-city African American or Hispanic students as much as it does rural Caucasian students, even upper middle-class students can be first generation,” said Matt Rubinoff, chief strategy officer at the Milpitas, California-based organization Strive for College.

He runs the program I’m First, which has about 200 member schools across the country that work with first-generation students.

At the University of Southern Maine, where more than half of each incoming class is first generation, every incoming student must meet with an academic adviser before arriving on campus, said Nancy Davis Griffin, a vice president at the university. The university, which has campuses in Portland and Gorham, educates many of Maine’s immigrants.

“This is really about how education lifts this group of students out of poverty. And that’s what we’re doing,” she said.

A week into her first year, Rios admitted life at Middlebury was already stressful and that’s before classes began Monday. But she’s said First(at)Midd had made it easier, especially in helping manage her time.

“I can’t even imagine how I would have done it without the program,” she said.