Confederate flag flies next to NCAA arena in South Carolina 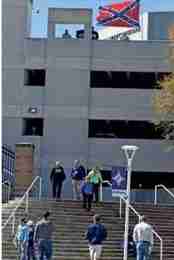 GREENVILLE, S.C. – A small group of protesters flew a large Confederate flag from the top of a parking garage next to a South Carolina arena hosting two men’s NCAA Tournament games.

The group arrived Sunday morning, raising the flag from the back of a pickup truck . They planned to stay throughout the games and be on grounds as fans arrived at Bon Secours Wellness Arena.

Greenville police had the group move the truck about 50 feet away, citing safety concerns if the flag tipped.

Protesters said they wanted to make their presence known to the NCAA. The governing body lifted its ban against South Carolina holding championships in 2015.

By the early afternoon protesters, many carrying Confederate flags, across the street from the arena’s main entrance.

NCAA executive Dan Gavitt said in a statement the organization would not permit symbols compromising a safe environment on venue property the tournament controls. Other areas are under the city’s jurisdiction, and the NCAA backed the city’s efforts to manage actions concerning freedom of speech.

This regional has dealt with politically charged events the past six months. The NCAA originally placed the games in Greensboro, North Carolina. But it removed them from the state over its HB2 bill, which limits protections offered to LGBT people and relocating to Greenville.

In 2002, the NAACP held a march in downtown Greenville to protest the state flying the flag on Statehouse grounds during the NCAA regionals at the arena.

South Carolina coach Frank Martin was asked about the flag protest after his team’s 88-81 victory over No. 2 Duke on Sunday night. He urged people not to judge all in South Carolina by the actions of some.

“Our state’s progressive. Our state has incredible people (who are) about moving forward,” he said. “But it’s America. We have freedoms. People have freedoms to do whatever they want to do with themselves and their property.” Sunday’s games featured North Carolina against Arkansas and Duke against South Carolina.

South Carolina was unable to host NCAA predetermined championships because of the organization’s ban, which began in 2001. The NCAA regional in 2002 was allowed to remain in the state. That led the NAACP and others to turn out for a march to the arena steps in support of taking down the flag.

The issue was settled in 2015 after the massacre of nine black Charleston church goers by Dylann Roof, who was seen in pictures with the Confederate flag. State lawmakers voted to remove the flag in July 2015 and the NCAA lifted its sanctions. Roof was convicted of multiple murder counts and sentenced to death.

Next post Stocks near biggest loss of 2017 as banks plunge