Congolese opposition leader Tshisekedi dies at the age of 84 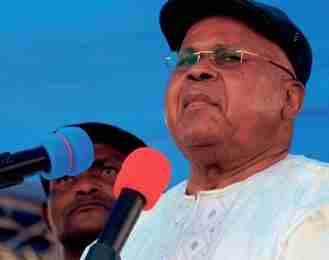 By SALEH MWANAMILONGO and KRISTA LARSON

Central African nation throughout dictatorship and civil war, has died, his political party said late Wednesday. He was 84.

His death comes at a politically fragile moment for Congo, where he was heavily involved in the recent deal to get President Joseph Kabila to agree to step down by the end of this year after months of deadly protests. The parties signed a deal that has yet to be implemented.

The stalemate already had worried observers, and Tshisekedi’s death likely will compound the difficulties.

Tshisekedi had been seeking medical treatment in Belgium, Congo’s former colonizer. He has long battled rumors of ill health because of complications from diabetes. In 2010, he walked the 15 miles from the airport to his suburban home in Kinshasa upon his triumphant return from medical treatment abroad.

A statement released late Wednesday by party spokesman Augustin Kabuya did not state a cause of death. Radio France Internationale said he died from a pulmonary embolism. It was not immediately clear when his funeral would be held back home in Congo.

Tshisekedi formed the country’s first opposition party in 1982 – the Union for Democracy and Social Progress or UDPS – in an effort to combat the longtime dictatorship of Mobutu Sese Seko.

Despite serving as the country’s most iconic opposition figure, he never managed to ascend to Congo’s highest office though he once declared himself president after the 2011 election was marred by allegations of vote rigging by the ruling party.

Most recently, he had been the current president’s most outspoken critic, at one point last year accusing Kabila of ‘treason” for not stepping down at the end of his mandate. A court ruled that Kabila could stay on until the next election is held, but critics say the court was biased.

“I launch a solemn appeal to the Congolese people to not recognize the illegal and illegitimate authority of Joseph Kabila, and to peacefully resist a coup d’état that was carried out with the blessing of the constitutional court,” he said in December in a message carried on YouTube.

With his death, Tshisekedi did not live to see whether Kabila will make good on his promise to leave by the end of 2017.

Even in his 80s, Tshisekedi had continued his advocacy, though he appeared somewhat frail in late July when he spoke at a rally upon his return to Congo after several years abroad, sporting his trademark flat cap.

His son, Felix, has also become a prominent political figure and headed the coalition of opposition parties known as the Rassemblement.

Tshisekedi was active on the political scene for decades, serving several times briefly as a prime minister under Mobutu, falling into the trap of many politicians co-opted by the dictator ultimately forced out in 1997.

Tshisekedi went into exile in November 2000 after repeated clashes with the government of Joseph Kabila’s father, Laurent, who became president after Mobutu’s departure and then was assassinated in 2001. At one point, Tshisekedi was banished to internal exile in his home village about 435 miles west of the capital.

But he made a triumphant return in 2003. Then when Congo finally prepared to held its first multiparty election in four decades, he initially asked his supporters not to register as voters, claiming the negotiations were flawed. He later backtracked and announced he would contest the presidency in that landmark 2006 vote, but only if voter enrollment were reopened to allow his supporters to register. Congo’s electoral commission refused, saying there was no time.

Tshisekedi then took on Kabila in the 2011 presidential election, ultimately contesting after Kabila was declared the winner.

“I reject these results, and in fact I see them as a provocation against our people,” the opposition leader told the AP at the time. “His term is finished. I am the president. I am the one who got the votes of the people.”