Cuba rejects new US policy, saying pressure will not work 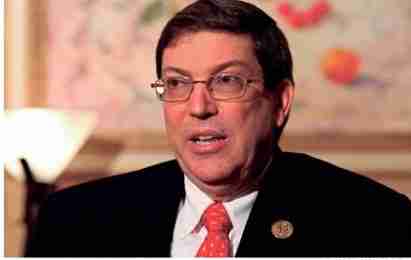 HAVANA – Cuba’s foreign minister rejected President Donald Trump’s new policy toward the island, saying Monday that “we will never negotiate under pressure or under threat” and refusing to return U.S. fugitives who have received asylum in Cuba.

In a hard-edged response to the policy announced Friday, Foreign Minister Bruno Rodriguez said from Vienna that Trump’s restrictions on transactions with the Cuban military would not achieve their objective of weakening the government. He said they would instead create unity behind the communist leadership.

He described fugitives such as Joanne Chesimard, a black militant convicted in 1977 of the murder of a New Jersey state trooper, as political refugees who had received asylum from the Cuban government and would not be returned because the U.S. has no “legal or moral basis” to demand their return.

Surrounded by Cuban-American exiles and Cuban dissidents, Trump announced from a theater in Miami that the U.S.

would impose new limits on U.S. travelers to the island and ban any payments to the military-linked conglomerate that controls much of the island’s tourism industry. Trump also declared that, “the harboring of criminals and fugitives will end. You have no choice. It will end.”

He said the U.S. would consider lifting those and other restrictions only after Cuba returned fugitives and made a series of other internal changes including freeing political prisoners, allowing freedom of assembly and holding free elections.

“When Cuba is ready to take concrete steps to these ends, we will be ready, willing, and able to come to the table to negotiate that much better deal for Cubans, for Americans,” Trump said.

Rodriguez’ response Monday was a clear signal that there could be very little, if any, high-level U.S.-Cuba negotiation during Trump’s time in office.

Already, while working-level meeting on topics such as search-and-rescue have taken place since Trump took office, no meetings between top diplomats have occurred. It’s a sharp contrast to Obama’s last year, during which top U.S. and Cuban diplomats met regularly to discuss topics including law-enforcement cooperation and compensation for Americans whose property was taken during the 1959 Cuban revolution.

“Cuba will not make concessions that harm its sovereignty,” Rodriguez said. “We have never done in the history of the revolution.”