Deportation of African and other black immigrants is increasing 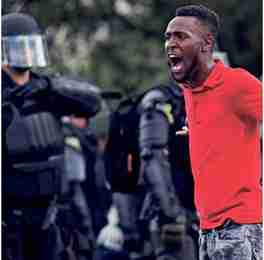 Black immigrants are much more likely to be deported due to a criminal conviction than nationals from other regions of the world.

Although often not covered in the media, the African immigrant community is facing mass deportations in the era of Donald Trump. While the immigration debate in the U.S. is often framed in terms of undocumented immigrants from Mexico and Central America on the one hand and the infamous Muslim travel ban on the other, the issue is more complicated. As the U.S. Immigration and Customs Enforcement (ICE) agency conducts its sweeps on immigrant communities, African people are among those who are being detained and deported. While deportations were in no short supply under the Obama administration, these deportations are expected to soar under Trump, whose immigration ban on six Muslim nations includes three African nations — Libya, Somalia and Sudan. Trump also is clamping down on refugees and asylum seekers.

According to data from the Department of Homeland Security, in 2015, ICE deported 1,293 African immigrants. Since the 2016 election, the ICE raids on black immigrant communities have intensified.

For example, in January, 86 men and women were deported to Mogadishu, the capital of Somalia, after being detained and imprisoned, as Africanews.com reported. In November, 108 immigrants were deported to Ghana and 20 people also were deported to Liberia, while 53 others were processed for deportation. Earlier this month, ICE deported 130 people to Senegal, six times the number recorded by the agency in its 2016 report.

There are 2.5 million African immigrants in the U.S., according to the Pew Research Center. When including the Caribbean, Latin America and other regions, there are as many as five million Black immigrants in America. People from Africa experienced the fastest growth rate of the immigrant groups coming to the U.S., 41 percent between 2000 and 2013.

In its “State of Black Immigrants 2016” report, co-authored with the New York University School of Law Immigrant Rights Clinic, the Black Alliance for Just Immigration (BAJI) found that Black immigrants are much more likely to be deported due to a criminal conviction than nationals from other regions of the world. More than one out of five noncitizens facing deportation on criminal grounds is black. Tia Oso, national organizer for BAJI whose organization works on advocacy, education and direct action on issues impacting black immigrants and African Americans, said there is not nearly enough coverage of what is happening regarding the deportations.

The biggest issue with the executive order as far as black immigrants are concerned, Oso noted, is that fully one- third of immigrants, refugees and asylum seekers are African. “So, to have a ban on refugee resettlement here — a ban on Somalia, Libya and Sudan — is 100 percent to reduce the number of immigrants from these countries, who are Black Africans, from coming to the U.S.” she said. “We have families who are being split up, family members being stuck in limbo in the refugee camps. These people have already been approved, already vetted and assigned to be resettled in the U.S.” Oso said these policies are designed to reduce to the number of black and brown people.

Not all immigrants are treated equally or being targeted by immigration agents. For example, there are approximately 50,000 undocumented Irish immigrants in the U.S., as CNN reported, yet they are not facing the threat of police raids and deportations. “If this was about immigration, then the undocumented Irish and European folks would be a part of the roundups,” Oso said. “The people being deported are from Mexico, Central America, the Dominican Republic and Haiti. So, this is about keeping America white, not making America great.”

She also said that “the roots of the anti-immigration movement are directly rooted to white nationalism and the white citizens councils, and are related to maintaining the white power structure in narrowly defining who is American and is free to live in the country.”

The BAJI report emphasized that “Black people are far more likely than any other population to be arrested, convicted and imprisoned in the U.S. criminal enforcement system — the system upon which immigration enforcement increasingly relies.” Immigrants, in particular, are exposed to more risks when they are stopped by law enforcement for minor offenses, and when they are arrested the local police share fingerprint data with immigration authorities.

“When the police decide to take on the duties of federal immigration enforcement, they often use these stops to question people about their immigration status and to turn immigrants over to ICE,” the report added. Immigrants also are susceptible to guilty pleas that could result in removal proceedings, with a criminal conviction resulting in possible detention and deportation.

Another issue that the public is not paying attention to, Oso noted, is the increase in the number of ICE and border patrol agents in the Trump budget. These law enforcement agents cooperate and are used in jurisdictional task forces. In April 2015, an unarmed Black man named Terrence

Kellum, 20, was shot to death in his Detroit home by a Black ICE agent who was a member of a multi-agency fugitive task force operation called the Detroit Fugitive Apprehension Team (DFAT). As ThinkProgress reported, officers were attempting to serve an armed robbery warrant at the Kellum household when the shooting took place.

“African American folks would say this has nothing to do with us, we are not immigrants,” Oso said. “[But] Increased surveillance can be weaponized and used against Black people.”