Dispute deepens over GOP delegates for US Virgin Islands 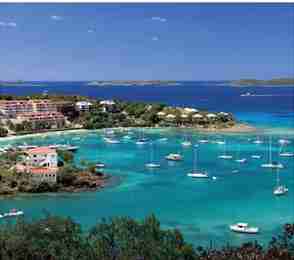 SAN JUAN, Puerto Rico – A dispute over which Republican delegates from the U.S. Virgin Islands will be sent to the upcoming national convention has grown increasingly unruly. Party members said Tues- day that a fight broke out during a weekend meeting of the Republican Territorial Committee, which was held at a gun range.

Dennis Lennox told The Associated Press that he used his cellphone to make a video of what he called the “uncivil and unbecoming conduct” of some people at Saturday’s meeting. He accused disqualified delegate Gwendolyn Brady of throwing a cellphone at him shortly after he started recording. Brady, the island’s banking and insurance commissioner, did not return a message for comment.

Other members said that Brady was physically assaulted by another delegate and that police arrived after the incident, which is the latest in the fight over delegates. “It’s just turned into madness, total madness,” said Herbert Schoenbohm, the party’s former chairman and a committee member who was at the meeting.

He told the AP that party chairman John Canegata was carrying a gun and used an artillery shell for a gavel as he threatened to have people arrested if they didn’t leave after the meeting.

Canegata declined to comment except to say that the committee complied with party rules during the meeting. He was quoted by local media as saying that he was carrying a concealed weapon and that he had forgotten his gavel.

The incident came just weeks after the U.S. territory’s Republican Party announced it was disqualifying six delegates chosen in March because they violated party rules. Among those disqualified were Brady and John Yob, a political strategist from Michigan who wrote a book titled Chaos: The Outsider’s Guide to a Contested Republican National Convention.

Saturday’s incident prompted Schoenbohm and other committee members to take a no-confidence against vote Canegata.

“The chairman is obviously going to ignore that,” Schoenbohm said. “The next steps are lawsuits.”

Brady, Yob and other delegates recently filed a lawsuit against Canegata accusing him of acting unilaterally when he disqualified them. Canegata called the lawsuit frivolous and an “act of desperation.” “The law of the land is clear: Republican Party rules -not courts – govern Republican Party procedure, according to established U.S. Supreme Court precedent,” he said in a recent statement.

Previous post A day of support for Jamaican non-profits