Dylann Roof’s jurors worship at church where he massacred nine 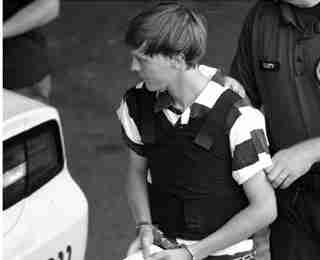 CHARLESTON, S.C. – The jurors who sentenced Dylann Roof to death for the racist massacre of nine black church members quietly visited the Charleston house of worship weeks later for a Sunday service.

In a newspaper opinion piece, the 18 jurors and alternates said Emanuel AME pastor the Rev. Eric Manning identified them only as “civil servants” at the Feb. 5 service.

After the service ended, they walked downstairs to the fellowship hall where Roof killed the nine people in June 2015.

“It was difficult to grasp that we were in the room that had existed in our minds only as graphic images presented at trial. Most of us became very quiet. One juror described the moment as `surreal’ while another noted how wonderful it was to see children playing and parishioners enjoying each other’s company in this now secured space,” the jurors wrote in the piece published Sunday in the Post and Courier of Charleston. They signed the piece with just their first names.

The jurors thanked Manning for not identifying them to the congregation so they could appreciate the music and the message from what they called “truly a special church.” They said they recognized the three survivors of the massacre and the family members of those killed.

“Seeing everyone in their beloved church praising God and enjoying fellowship left us all with an incredible feeling of peace,” the jurors wrote.

The jurors spent about a month hearing testimony and seeing graphic, bloody pictures of Emanuel AME church. They deliberated only a few hours before finding Roof guilty on Jan. 11, and later for a few hours more before sentencing him to death for hate crimes.

Manning met with the jurors after the service, and the pastor told them they would forever be part of the Emanuel AME family.

“We were not identified as the jury, and that’s the way we agreed with Rev. Manning that it should be. Keeping our names out of the public has been our choice, and this was as close to being publicly recognized as we care to be,” wrote the 18 jurors and alternates.

On Thursday, the judge who presided over Roof’s trial will sentence his friend who pleaded guilty to failing to report Roof planned the crime and lying to federal investigators.

Prosecutors filed a motion Monday asking U.S. District Judge Richard Gergel for a harsher sentence than the federal guidelines call for, saying Joey Meek knew about the full scope of Roof’s hatred and desire to start a race war.

Meek also didn’t call police after hearing about the attack and being certain Roof had done it, they said.

A stiff sentence would serve as an example and better account for the horrible nature of Roof’s massacre, the prosecution wrote.

They also wrote that the victims’ relatives are expected to ask for a substantial sentence for Meek.

The court papers don’t specify the guidelines for Meek’s sentence, but they appear to land between about 2 1/2 and 3 1/2 years in prison. The maximum sentence is eight years.

Meek’s lawyer, Deborah Barbier, filed a motion Monday that was not made public. A listing of its contents, all sealed, includes a statement from Meek, letters to the victims’ families, charts of sentences for similar crimes and remarks from President Barack Obama.

Barbier would not discuss her motion Monday.